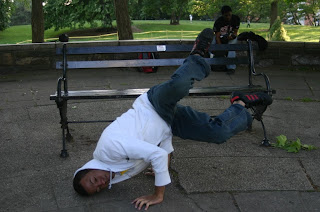 (David b-boying "in front" of the Wright bench)

"Hells no," I quickly informed him. "There's no way you're breaking this bench on my watch." (I was already imagining the kinds of bad things Wright scholars such as Jerry Ward and Maryemma Graham might say about me if they knew I was a passive enabler to any damage done to the bench dedicated to the famed author of Native Son. Oh yeah, and David could've hurt himself too.)

David, like several of the fellas in our black studies crew, is a hip hop connoisseur, and he had arranged to pose in these various shots around New York City as he paid homage to old-school rap culture. The b-boying proposal at the Wright bench fit within his larger project. So, I decided to make a compromise: David could strike the b-boy pose in front of the Wright bench. I'm calling the series of photos I took "the B-boy, Native Son Compromise."

Mr. Wright approves, but he also demands that David write an essay about the bench.

Maybe not an essay. But wouldn't mind digging deep into the mind to link lines of beauty together into a poem.