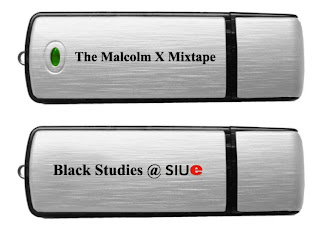 Over the last few months, a group of our black studies contributors (Adrienne Smith, Dometi Pongo, and Al Henderson) worked with me on what we viewed as a forward-looking, progressive project. With Malcolm’s writings and speeches as a focal point, we thought and talked and then thought and talked some more about producing something for “under-represented” folks that might inspire a greater sense of awareness about topics and themes such as politics, anti-black racism, education, slavery, freedom, and justice. That something was a mixtape, and Pongo and Henderson produced the core of the content.

Listening to and viewing the materials on the mixtape demonstrate that these two young men have been doing their black studies homework. Almost all of Pongo’s tracks contain samples from Malcolm’s speeches, and more importantly, Pongo continually invokes and projects Malcolm’s black nationalist militancy throughout his compositions. Henderson remixes and ultimately refreshes Malcolm’s messages so that we can receive them clearly through these thoughtful video compositions. Who knows how Henderson managed to say so much with so few images or where he learned to speak so eloquently about the past using such hip, mixed media discourses?

Keeping in the spirit of mixtapes, members of our black studies crew have been circulating these limited edition compilations among the grassroots here at SIUE. I’ve been really impressed and fascinated with the results. Observing the development of this student-produced work of creativity and ingenuity, which updates Malcolm’s vision, has been a tremendous learning experience for me. As my down-home elders would say, I’m just glad to be a witness.

I know this is a Black Studies blog and I do support your representing your thoughts and opinions (or your students/contributors sharing their thoughts/opinions) on African-American issues here at SIUE (or outside of SIUE)...because I believe your discussions on, for example, racism and identity are important; however, considering what little I see (or at least know about) how SIUE represents those other under-represented groups here at SIUE, I do have to ask why you specifically chose to write "anti-black racism" when discussing that you wanted to produce something for "'under-represented' folks" (your quotes for "under-represented.")

I want a discussion on these issues. It's important. And I also know that you personally can't represent every under-represented person out there...I want people's thoughts/feelings/experiences to be heard...and at the same time I also don't want to forget those whose voices have not been heard yet. It's not like everyone is going to agree on every issue...because that's just not realistic...I just want to have a respectful conversation...I want to hear you...I want to hear others....

Thanks for stopping by and commenting.

Are there various other issues and groups that need assistance? Sure. But we start locally and with a targeted focus. And then expand.

Consequently, we often take heat for our focus. Some of that heat I've come to understand as a certain reaction that people have about us and various other groups that gather in the name of something black.

But for what it's worth, we collaborate all the time. And black studies has always been a multi-racial, dynamic enterprise. To take one example, our Haley Outliers project has involved about 150 students. Some are white. Some are Hispanic. Some Asian. Some African American. And some prefer not to designate their race or ethnicity.

Oh, and we do think about how all racism is offensive. But we also have come to learn that those who claim to speak and address "all" end up really, never talking to anyone in particular.

I really hope that you didn't take my query as offensive in some way. If you did, it wasn't meant to be that. In these times when representatives can't walk to the Capital to vote without being spit upon or called racial or other derogatory slurs, and when the President himself is verbally attacked based on the color of his skin, I believe it's important to have an open discussion about racial issues. Not that everyone is going to magically come to an understanding, because that would be unrealistic; however, if people aren't allowed to ask the potentially silly or serious or misunderstood questions, how do we learn as either individuals or as a society? And, if I'm understanding your last paragraph correctly (which I may not be), I guess the fight for respect starts small and then hopefully all who are judged for the color of their skin or their gender or their sexual orientation will follow (or fight the fight alongside you). Then again, I think that understanding oneself and what one's history is also gives an individual power. And I think that having that self-power is important too. All I know is that it seems that there is a mighty long road ahead...and I find that sad. I don't understand why there isn't more respect toward individuals whether they share your experiences/are the same ethnicity as you or not. Keep blogging, because you give lots of food for thought and I want to think outside of my box.

My bad if the tone was a bit edgy. I didn't realize, until I re-read, that it could've been viewed that way.

These days, we try to go in with the understanding that there are multiple *factors* accounting for inequality and even for success, for instance. So it's never just skin color. It's skin color and socio-economic class and gender and geographic location and social networks and governmental policies and....well, you get the point.

So really, I'm always hoping that a project we do related to one thing (with multiple factors) makes it possible to connect to various other things.

Still and I've been putting more more thought into this, there's a "heat" and resentment that gets directed at African Americans or black-related projects on campus that, for better and worse, heightens my curiosity.

We're completing the process of reviewing surveys that a couple hundred students were given regarding barriers, and it's interesting that when unprompted, the students--white, black, Asian, and Indian--seemed to call black people and groups out as being a problem and receiving extra benefits. I wonder why only black people are identified, why black people are so visible, given their small numbers here. I wonder why the strong feelings and tensions.

Ok, I could dismiss it as racism. That's part of it. But it seems that there is more. And I also wonder (and perhaps worry) where this heat and tension directed at African Americans will go.