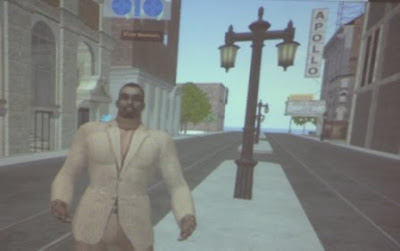 Well, one of the best was saved for last. On the closing day of the MLA conference, Bryan Carter of Central Missouri State University was scheduled to make his presentation for a session entitled "Digital Africana Studies." But before Carter uttered a single word, he linked his avatar from Second Life to a microphone, and his avatar, standing on a walkway in Harlem near the Apollo Theater, proceeded to narrate the opening five minutes of Carter's presentation.

Typically, PowerPoint presentations constitute the most hi-tech features of an MLA presentation. But Carter--through the creative use of his avatar--was making something like PowerPoint look passe. What was especially intriguing and important about Carter's presentation was that he presented innovative research findings at the same time that he modeled an innovative approach for sharing the findings.

Carter's presentation focused on the Virtual Harlem Project, a 3-D 1920s and 30s version of one our most famous black neighborhoods. The project has gone through various versions and platforms over the years, and is now accessible for Second Life clients. Visitors to this Harlem can attend poetry readings at the public library, plays at the Lafayette Theater, and jazz performances at the renowned Cotton Club.

Students in Carter's African American literature classes log onto Second Life, create an avatar, and explore the world of Harlem as they cover the Harlem Renaissance, for example. More than simply moving around the virtual space of New York City, however, the students collaborate on projects with each other as well as with students and technologists at other universities across the country and around the world. Carter informed me that he actually teaches entire courses on Second Life.

Obviously, I can't do Carter's presentation and work justice in the small amount of space of a single blog post. For now, it's worth saying that the notion of a digital humanities project that so thoroughly incorporates African American subject-matter is really worth considering. Too often, digital humanities projects neglect to take black locales and scholarship seriously, so an enterprise like the Virtual Harlem Project is really refreshing and instructive.

As Carter and his folks are demonstrating, a 3-D world like Second Life can be quite useful for facilitating some really expansive, collaborative endeavors for those of us interested in Black Studies, African American literature, and digital humanities.

Links:
Click Virtual Harlem for a short video of Carter providing a tour of the project on youtube.
Posted by H. Rambsy at 6:00 PM