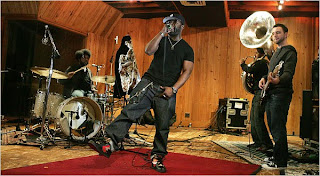 Strange that during my time in Philly for the Modern Language Association (MLA) Conference, I didn't really get the opportunity to have deep conversations about The Roots or A.I., two subjects that were central elements in my cultural and intellectual interest in the city back in the day. But then, for the most part, the kind of folks who are into Black Thought, ?uestlove, or "The Answer" aren't the kind of folks who populate MLA.

Now, I'm not saying that the broader profession of language and literature is unfriendly to, say, black men of a certain younger generation, but...well, the field doesn't go out of its way to engage or appeal to this population either. So maybe there's a kind of indifference on both sides.

In their spare time though, all these fellas have interests in the arts and humanities. In particular, we have extended conversations, ok, and arguments about Jay Z, Lil Wayne, and Drake. We go back and forth about Huey and Riley Freeman. We talk sports, including the cultural significance of folks like Kobe, Bron, and D. Rose. But, like I said, all of these interests occur in spare time, beyond the formal class, and perhaps a long way from the world of MLA.
Posted by H. Rambsy at 2:47 PM