Getting a broad range of folks together with common and divergent interests in one room and on the same page, so to speak, is always this wonderful challenge and opportunity. We'd need some resourceful connectors--those with extensive social circles--in order to bring folks in film, black studies, African American literary studies, and digital humanities together. Our scholar, homegirl Anna Everett happens to be one of those connectors.

She co-organized and presented on a number of panels at the conference, including the “Digital Scholarship and African American Traditions” session where I presented on the Project of History of Black Writing. Professor Everett was connected to the Association for Computers and the Humanities folks, who convened the “Digital Africana Studies” session, and she’s on the executive committee of the MLA Division on Film. 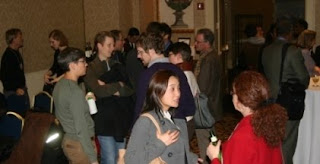 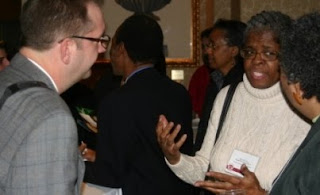 (scenes from the Division on Film cash bar, Dec. 29)

And in that role, Professor Everett was a leading force in organizing the Film cash bar at MLA, an event that brought together all kinds of folks in a variety of fields and with multiple interests. Everett, who now chairs the Department of Film Studies at the University of California, Santa Barbara, directed Black Studies some years ago, co-organized the two Afrogeek conferences, and has published work on African American culture and technology, including Digital Diaspora: A Race for Cyberspace.

In other words, in addition to being a connector, Anna Everett actually works at the crossroads of film studies, black studies, and digital humanities.

Of course, I don’t want to get too caught up in the conventional boundaries of disciplines, for in many ways I’m hoping that Black Studies, at least how we’re envisioning the program here at SIUE, is also a kind of connector and a crossroads of African American literary studies, digital humanities, and film studies, to name a few possibilities.
Posted by H. Rambsy at 5:55 PM