A Notebook on the work of Allison Joseph 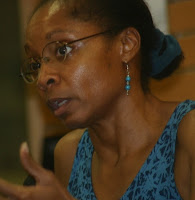 A couple of years ago when we began implementing plans to blog regularly about poetry, we chose to make our writings about Allison Joseph's poetry central to our overall project. As a prolific writer who has covered a range of topics, we concluded that she would provide us with many points of departure.

Since arriving at SIUE, poets Stacey Lynn Brown and Adrian Matejka have really led the way increasing the appreciation and lore of Allison Joseph. Stacey and Adrian are constantly identifying poets, volumes of poetry, and individual poems people would enjoy. And they are particularly inclined to highlight Allison Joseph. Stacey's and Adrian's enthusiasm about Joseph's poetry has in part inspired and guided our interest in blogging about her writings.