The Writer as Runner: Allison Joseph 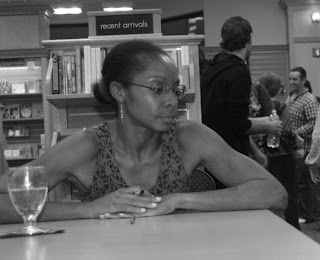 Over the last few years, poet Allison Joseph has become more and more known as a runner. Follow her on twitter or friend her on facebook, and you'll see daily updates about her active running regime.

She runs at least 4 to 5 miles each day. On October 3, for instance, she provided a summary of what she had accomplished during the course of the week: "9 workouts for 43.5 mi and 5072 calories burned."

Since running is such a major part of her life, I've been waiting to see when and if she takes on the topic of jogging, running, and fitness as subjects of her poetry. She recently made me aware of her poem "Three Miles," which appeared on the Tabula Poetica site.

The poem blends Allison's experiences running with her activities as a writer. "My feet, like my words, carry me," she notes in the opening line of the poem. Later, she mentions her breathing "lurching in and out / of my body in misplaced tidal / fervor, elusive as phrases." Her body has reactions to the intensity of running that resemble the way "my frantic mind rushes / after new bouts of language, / riots of words." Ultimately, "Three Miles" is really a poem about how running corresponds to the act of writing poetry.

Allison is the only major poet I am aware of who is so involved with running. I wonder if there are others out there. I am aware that Rita Dove is active as a ballroom dancer and has written about her experiences dancing in her volume American Smooth.

I hope and suspect that we'll read more of Allison Joseph's "running poems" in the future. Wouldn't a whole volume devoted to her experiences running be something? Let's hope.