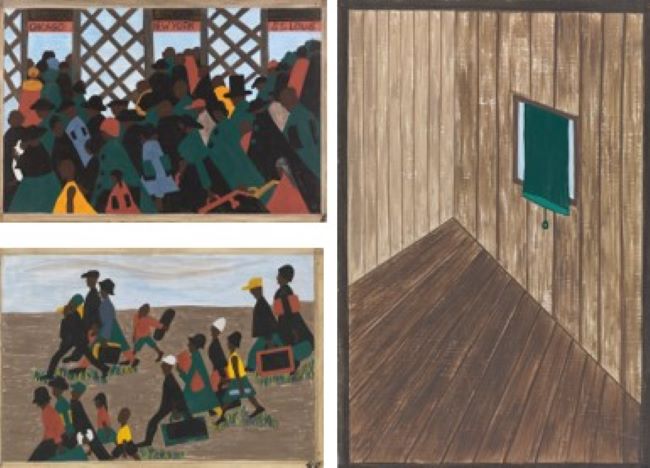 In his poem "The Beauty of Bareness," William J. Harris points out that Jacob Lawrence's "genius" was his ability to document those origin places and spaces of African Americans who moved North during the Great Migration.
"Lawrence's genius," writes Harris, "Was to paint / Those rooms / Left behind." He describes a painting that includes a brown bare wood room with "A single dark green / Shade / Covering / The window." Harris is referencing Lawrence's painting, panel 25 (They left their homes. Soon some communities were left almost empty) from his Migration Series, first published in 1941.
These empty rooms, as envisioned and presented by Lawrence, explains Harris, showcases the process of

Creating a
Stark beauty
A simple beauty
A bare beauty

The poem had me thinking about the beauty of bareness in Panel 25, and I was inclined to think about the presentation of empty spaces throughout other Lawrence images, especially those paintings focusing on the South.
Here's one: 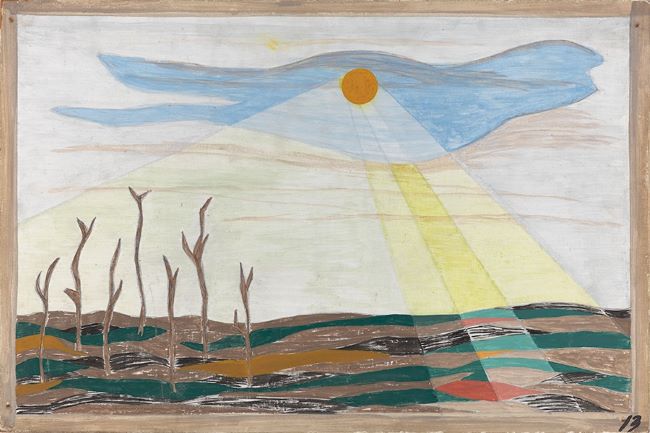 Panel 13 (The crops were left to dry and rot. There was no one to tend them.) shows an empty field, the result when workers left for the North.
Thinking about the implications of the image gives you (the viewer) some mixed feelings. It's sad to consider the absence of people here and what happens to the land. But on the other hand, it's refreshing to know that so many people escaped the physical and emotional tolls of sharecropping.
Alright, and then consider Panel 15 (There were lynchings.) -- a sparse, beautiful, and deep powerful painting. We've been overwhelmed with detailed images of brutality committed against black people. I'm talking everything from the photographs of Emmett Till to the video of George Floyd as well as those depictions of beatings in films about slavery. All of those images are so direct, so vivid, so packed with information. 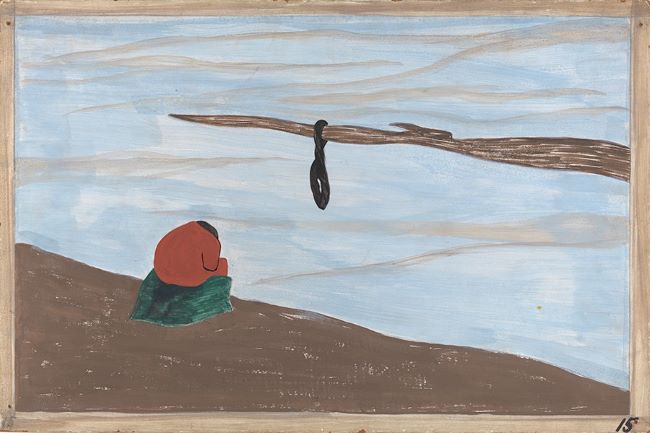 By contrast, Panel 15 is relatively empty. A figure sitting with lowered head by a tree with a rope. Here again, you could consider the implications of the image from multiple positions. On the one hand, you see this image and imagine the figure mourning the lost of a loved one to a lynching. At the same time, there's a sense of relief that large numbers of black people escaped and would no longer have to endure this feature of ritual often associated with the South.
And there's more. Consider Panel 15 in relation to all those vivid images of anti-black violence. Lawrence does not subject us to the details of lynching. He instead presents what Harris called "a bare beauty," even if what we know about what happened is quite disturbing.
Thinking about bareness took me back to artwork by another black artist, John T. Biggers. Professor Harris was my professor when I was in graduate school at Penn State, and the English department offices were located in the Burrowes Building on campus.
In one entranceway to the building, there are two large Biggers images known as the Harvest Songs murals that face each other. One image, entitled Night of the Poor, shows people with empty bags. They are poverty-stricken, starving. The other image, entitled Day of the Harvest, shows people full of joy-- singing, embracing, and holding bags filled to the brim.

A caption on the Night of the Poor mural  reads in part:

The effect which lack of education has one people is depicted. It is show by their inability to get along, their lack of cooperation and knowledge which results in 'empty bags' as the symbol of poverty, lack of knowledge and starvation.

As a student at Penn State, I walked by those murals by Biggers hundreds of times. I often thought about those empty bags in the center of the image.
And now, all these years later, while reading Harris's "The Beauty of Bareness" I considered Lawrence's work but also recalled that image by Biggers, which signals the meaning of emptiness in a different context. Still, it's fascinating to consider the intersections of a poem by Harris, a series by Lawrence, and murals by Biggers.
Related:
• William J. Harris and those cardplayer paintings
• A Notebook on William J. Harris
Posted by H. Rambsy at 10:28 AM