Number of unique words in four novels by Toni Morrison

[Some preliminary notes on a project that my brother Kenton and I are working on. Thanks to poet/professor Opal Moore for the nudge.]

Have you ever thought about Toni Morrison's word usage, and specifically the number of unique words she uses in multiple novels? I was curious, and decided to do a few measurements.

For the purposes of comparison, I needed a baseline, so I took a look at the first 5,000 words in two of Morrison's novels: The Bluest Eye (1970) and Beloved (1987). Off the top, before any calculations, I assumed that Beloved would have the most extensive vocabulary, mainly because it's one of the most critically-acclaimed American and African American novels.

My assumption was wrong. 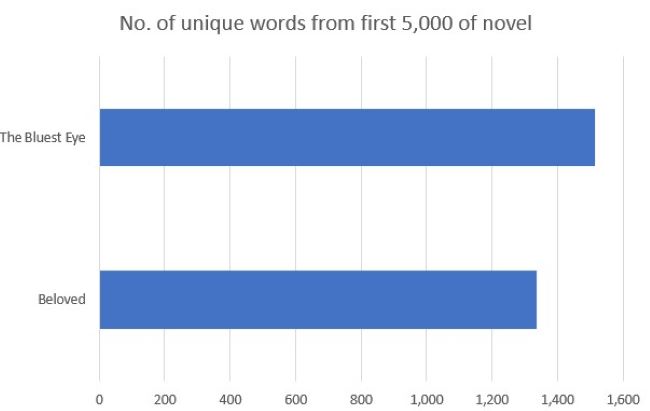 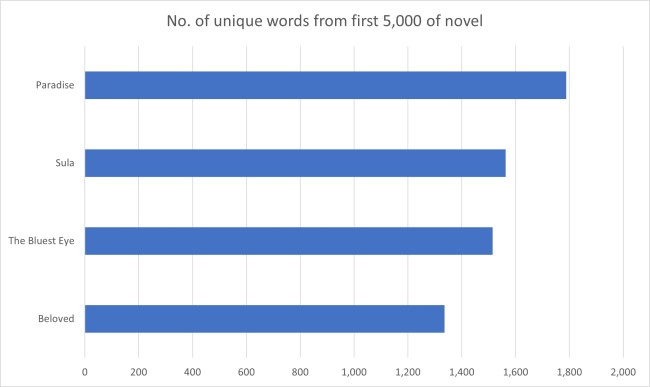 The number and variety of word usage give us ways of thinking about elements of novels beyond our conventional approaches to literary analysis.  These numbers don't tell us whether one novel is better than another one, but they do give us some indications concerning how writers use words. Gaining more information on black word usage can of course be useful.
Posted by H. Rambsy at 7:25 AM

The first graph exaggerates the difference of the unique word count because the graph starts at 1200 instead of zero. Why did you make the choice instead of the second bar graph?

Thanks for that. I made an error in the approach.

I updated it. Still trying to play around with possibilities.