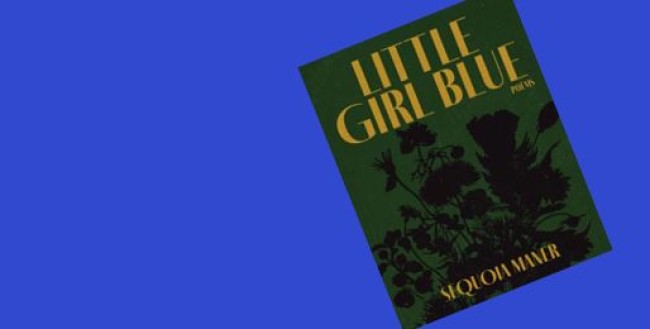 For many decades, going back at the very least to Paul Laurence Dunbar, Langston Hughes, and Sterling Brown, black poets highlighted black musicians in their works. During the 1960s and 1970s, the Black Arts era, poets became particularly interested in producing works on these cultural figures, composing works on Billie Holiday, Aretha Franklins, James Brown, several jazz musicians, and most notably John Coltrane.

In her poetry chapbook, Little Girl Blue (2021), Sequoia Maner's Tupac and Prince poems extend the many works we've seen on black musicians. Her poem "Epistle" for and to Tupac reads as a letter with her communicating to the subject about where he came from and his movements across his career. "You are scattered like jazz across these states" and "You are the ring shout of a radical tradition," and later "You are the sound a ghost makes when it returns to a body."

We're getting to look over the poet's subject as she communicates with Tupac. We're moving along with Tupac as he is reminded about his significance. Maner's practice of speaking directly to her subject of course took me back to Dunbar's Douglass, where he's talking directly to his subject. Who knew that Dunbar and now Maner could speak, through poems, to those whom we assumed were dead?

And listen, Maner keeps going. Part one of her Tupac epistolary poem looks somewhat like a conventional poem with short lines and phrasings. Part two appears more like a conventional letter, and then Part three, "a resurrection recipe" appears as a list of ingredients. Look, this ain't your everyday elegy, is it?

And then still, her "The Day Prince Died" poem does something else. Here, the poet discusses the many actions and changes someone went through when Prince passed away. Maner writes, "the day Prince died she devolved n2 muteness" and on that day, she "wander-wondered / danced profusely" later still "she married a man / she married a woman / she was always alone."

I really valued how this poem got me thinking about tributes and elegies in a way that I had not really considered enough. What happens to an individual person when a major musician dies? What changes are prompted when we lose public figures? What movements do we do, and what interactions do we end up having? Maner's poems had me wander-wondering.