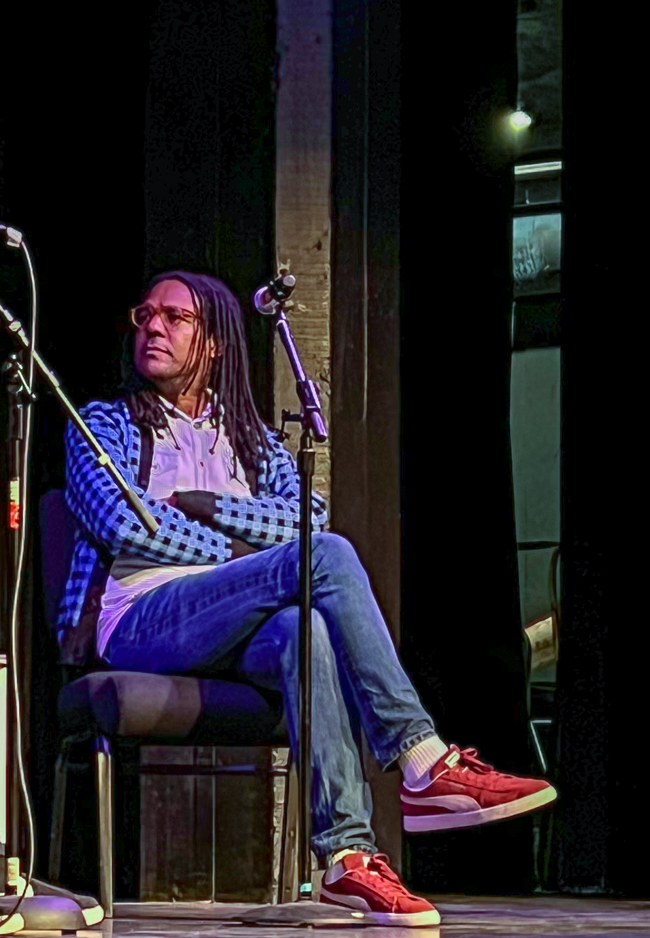 I first started reading his work back in 2000, when the paperback edition of The Intuitionist (1999) was published. From that moment on, I decided I'd never be late on a Whitehead book again, reading each one of his books as soon as it was released. And he's constantly given us -- his readers -- fresh materials, putting out a new book every couple of years for twenty years now.

At one point,Whitehead said, "I had to write all those books to figure out how to write this sentence now." He was making the point that he had become a better writer based on producing book after book after book.

He spent much of the time talking about Harlem Shuffle. He opened by reading a short excerpt from the novel. Like his previous books The Underground Railroad (2016) and The Nickel Boys (2019), his current book has been widely reviewed and praised.

Whitehead speaks in precise ways about his approach to producing novels. He devotes extensive time to outlining, and then, he spends 12 to 14 months producing the manuscript. His ideas for the work often begin with questions about a topic, then characters, and then time periods. He purposely pushes himself to try new things, hence his creative body of work.

I've studied Whitehead's work and read interviews he's done for so long now, I was familiar with several of his responses. However, I had not previously heard him mention how much he was influenced by comedians George Carlin and Richard Pryor. He noted that when he was young, and his family got HBO (which gave them an excuse not to talk to each other), they would watch Carlin and Pryor.

I felt like I received an added piece of a puzzle when Whitehead mentioned that Carlin's cririques of American society were important to his outlook. Of course! Whitehead infuses his novels with all kinds of commentary on American life. The amusement and jokes throughout his novels might distract folks from the critiques.

Pryor, noted Whitehead, had this approach of presenting something funny, then something horrible, and then something funny. You can see that approach in the different kinds of books that Whitehead writes. Zone One (2011) and The Noble Hustle (2014) are filled with jokes. The Underground Railroad and The Nickel Boys present troubling histories. And now Harlem Shuffle has all these fun and funny moments.

Early in the presentation, Whitehead had said humor is an important part of his project. Listening to him later discuss those comedians offered background on his approaches to humor.

Whitehead said that he had finished his novel the week that George Floyd was killed. So even though a riot and unrest appear in the book, he was not directly responding to the event. In the United States, another brutal indicent against black people is just around the corner. To write about it today is to echo the past and predict a future.

Whitehead's books, and more broadly, some of his artistic ideas, have been a central force in my African American literature classes at Southern Illinois University Edwardsville (SIUE). For one, his interest in incoporating pop culture into literary works is a topic that I frequently discuss. In addition, I share his inclination to consider the intersections of race, technology, and history.

Before the question and answer period, Whitehead closed the event by reading a short excerpt from his next novel, a follow-up to Harlem Shuffle. While sequels are quite common, it represents a unique turn for Whitehead.

Like I said, I enjoyed the event, as I did Whitehead's last visit to St. Louis in 2016, when he discussed The Underground Railroad. This time, the audience was smaller, but I think I preferred the format this time, where instead of a reading and then Q & A, Whitehead was in conversation with G'Ra Asim. The conversation format allowed for more time for the author to really discuss his ideas, motivations, and influences with respect to his works.

Related:
• A Notebook on the work of Colson Whitehead
Posted by H. Rambsy at 10:26 AM