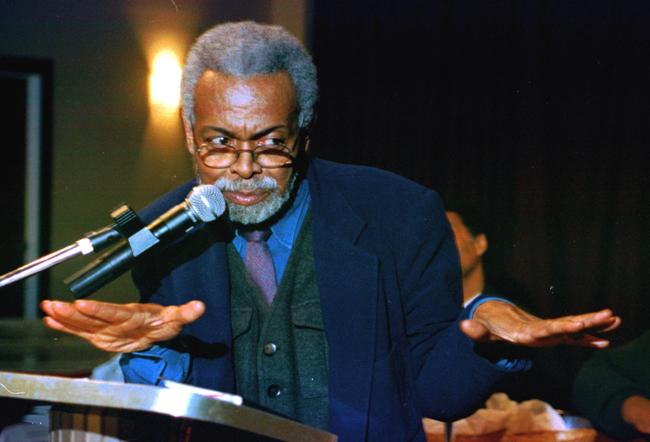 This summer, among several different poems, I covered Amiri Baraka's "Dope" and "Jungle Jim Flunks His Screen Test" with my graduate students. As an assignment, they had to determine which one of those poems they'd choose if time constraints allowed them to focus on just one.

I was initially surprised that most of them chose "Dope." But then, I shouldn't have been. I've chosen that poem again and again now for twenty-two years.

I first encountered Baraka's poem during a graduate school visit to Pennsylvania State University in the spring of 1999. A graduate student who was already in the program asked me if I had heard Baraka reading it before, and when I said, "no," he was like you gotta check it out. He played it on his computer.

I was blown away. I was almost done with my undergraduate career at Tougaloo College, and I had never heard anything like what Baraka was doing in the poem. The pace. The politics. The jokes. The wordless phrasings. The many, many references, that outstanding cultural catalog.

Later that day, I met with Professor William J. Harris. I was somehow not fully aware that he was a leading Baraka scholar, because if I had known, I would've asked him more questions. Instead, I went on and on telling him how moved I was by Baraka's "Dope." At one point, Professor Harris reached onto his bookshelf, got a copy of Call and Response, and said, "Here. The CD with 'Dope' on it comes with it."

Obviously, I decided to attend Penn State for graduate school. A considerable amount of time in graduate school involved me talking Baraka with Professor Harris.

Fast forward to spring 2003, I visited Southern Illinois University Edwardsville for a campus visit. I gave a research presentation, where I discussed Coltrane poems, noting work by Baraka, Jayne Cortez, Haki Madhubuti, and others. I also had to give a "teaching presentation" for one of Eugene B. Redmond's literatures classes, and I decided to introduce them to Baraka's "Dope."

Like me, the students were blown away. That the students rated me so highly and vocally expressed their desire for me to teach at SIUE was no doubt shaped by their interest in Baraka's poem.

I've been teaching at SIUE for eighteen years now, and during that time, I've made Baraka's "Dope" a staple of all my literature courses, presenting the poem to students every year.

Related:
• A notebook on Amiri Baraka
Posted by H. Rambsy at 7:42 AM