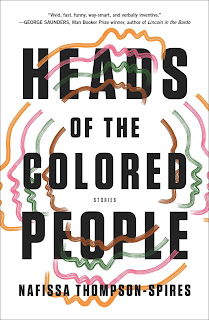 This semester, students in our Haley Reading Group are covering Nafissa Thompson-Spires’s short story collection Heads of the Colored People. I’m looking forward to reading their responses to prompts that my graduate student Lakenzie Walls and I provide.

The first story we read was “Belle Lettres,” which is presented in the form of corresponding letters between two Black mothers who lob snide remarks and direct insults at each other and the other’s daughter. Students had a range of responses to the story.

“The whole read was interesting,” wrote Tracy, one of the participating students. “It went from 2 mothers talking about their kids to it becoming a shady and petty battle.” Another student Kalonji pointed out that “the pettiness rose to such a high point where an educated grown woman resorted to a direct verbal assault on the mental state of a child which was a reach in itself.”

Justin observed that “As an African American who grew up in a predominately black area, I've witnessed exchanges like this regularly.”

Another student had apparently witnessed similar behavior before. “In all honesty, seeing two mothers compete over their daughter’s achievements was no surprise,” wrote Paige. “The biggest shock to me was that they let this rivalry affect their young children.”

Tymera was troubled that children became the target of insults: “The part that stood out to me most is how one of the mothers was insulting the other mom’s daughter. It’s one thing to not like the parent but to talk about her daughter isn’t right.”

For Evan, the mothers had deeper personal problems themselves: “The way these women speak to each other is abhorrent and sad. It is obvious that each of their insecurities forces them to attack the other to overcompensate for their own lacking self-esteem.”

Not all students were disturbed by the mothers. Alexys noted that some of the insults “made me laugh out loud when I read it the first time.”

“This entire story,” wrote Carah, “had me rolling in laughter.” She pointed out that the mothers were “roasting each other’s children based off of frivolous schoolgirl issues.” They could do better Carah thought: “They should be sticking together. The women need to get their children to feel a sense of community.”

I was intrigued by the varied responses from the students. Next time I cover this story, I’ll want to get more of their reactions about what they thought Thompson-Spires was up to by producing a story like this.

Related:
• A notebook on the work of Nafissa Thompson-Spires
Posted by H. Rambsy at 10:33 AM