Barack Obama's memoir by the numbers (so far) 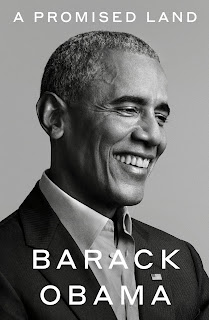 I've been reading reviews and commentary on Barack Obama's A Promised Land (2020) here and there, and since I do some work on contemporary African American book history, I wanted to note a few things.

In 2017, Michelle and Barack Obama sold the rights to publish their memoirs with Penguin Random House for more than $65 million. That's more than any other presidential memoir in history.

Michelle Obama's memoir Becoming (2018) was released to considerable fanfare and earned tremendous sales. Her book was 448 pages. Barack Obama's memoir is 768 pages. A Promised Land is part one of a two-part project. Commentators, including reportedly Barack Obama,  note that Michelle Obama had the assistance of a ghostwriter, while Barack apparently wrote his book by himself.

The New York Times, The Washington Post, The Guardian, NPR, and several other outlets have included A Promised Land on their "best books of the year" lists. As a result, it is likely that the book will be a popular Christmas gift.

In addition to having dozens of publications and news outlets highlight the book, Obama has done high-profile interviews , including on 60 Minutes and with Oprah Winfrey, and he has appeared on late-night talk shows to promote the book.

Here's something: how will a book like Obama's A Promised Land affect the production, reception, and study of African American literature? Will the widespread success of a book like this lead to increased interest in various other titles by Black writers? And what about memoir and autobiography? To what extents will the popularity of Becoming and A Promised Land influence how, "life writing," as autobiographical narratives are sometimes called, are presented in courses on American and African American literature?