The Black Arts poet-essayist Larry Neal once mentioned a question he and his comrades used to raise: "what if James Brown read [Franz] Fanon?" It was a way of imagining Brown engaging Black radical writing and concepts. I was recently confronted with a new idea. What happens when a Black visual artist reads Critical Race Theory and Henry Dumas and Amiri Baraka?

Last night, visual artist John Jennings gave a talk, "Cyborgs and Crossroads," as part of a series hosted by the Margaret Walker Center at Jackson State University. Throughout the talk, Jennings revealed his deep and widespread reading and thinking across African American literary and critical thought. What separates Jennings from most other readers in this realm though is that he regularly produces related illustrations.

Throughout his talk, Jennings presented selections of his works, which have been produced over a long period of time. I was really moved by images he and Stacey Robinson produced based on readings of stories by Dumas and Baraka. One image was based on the mythical instrument that appears in Dumas's short story "Will the Circle Be Unbroken," and the other image of a shoe with a propeller, emerges from Jennings's and Robinson's reading of Amiri Baraka's story "Mchawi," where the author mentions shoes that allow flight.

Jennings showed another image from Baraka's story "Pig Detector."  Here, Jennings and Robinson imagine and illustrate a device Baraka mentions from the story that senses of-duty police officers. It was really fascinating to see Jennings giving new life to works by one of our greatest writers -- Amiri Baraka. 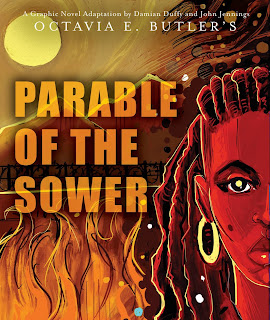 But look, to only focus on those images touches the tip of the iceberg. Jennings and his collaborators have been engaging African American literature and the critical framework Afrofuturism in his work for years and through dozens, if not hundreds, of images. Jennings collaborated with Damian Duffy on graphic novel adaptions of Octavia Butler's books Kindred (2017) and Parable of the Sower (2020). Jennings and Robinson illustrate Tony Medina's young adult graphic novel I Am Alfonso Jones (2017). That's just a small sample of Jennings' prolific output (Here's a checklist of some of his works).

The talk that Jennings gave last night offered a quick overview of projects that he has done and what he's doing. Essayist, poet, and editor C. Liegh McInnis served as the moderator, and thinking on Jennings's work gave me new ways of considering some of McInnis's discussions of imagery in Black poetry.

More than that, McInnis is really engaging, creative, and something of a militant humorist in the spirit of Malcolm. At one point as they discussed Afrofuturism, McInnis said, "the notion of who's civilized often has to do with how much mass destruction you can cause through technology." In other words, Eurocentricism and white supremacy imposed upon others through a multitude of machines and devices, real and figurative. The way McInnis said that and other points were humorous and painfully true.

There's so much more to say about Jennings' career as an artist, curator, and organizer. I hope to provide a few more pieces soon.