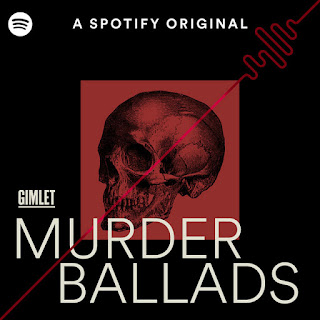 I've listened to many podcasts over the last few years, but I've struggled to come across episodes -- scripted ones -- that deal with African American arts and culture. For this reason, I was especially excited when Laura Morris reached out and asked me to share some thoughts for an upcoming episode of her podcast, Murder Ballads.

The show is about songs, specifically murder ballads, derived from true crimes. The podcast is a really inventive concept, and then it's one that has been hiding in plain sight for so long.

Morris contacted me for her Stagger Lee episode. The figure is also known as Stagolee, Stack-o-Lee, and Stack Lee. He's one of our most well-known bad men, and I was invited to contribute based on my research and writing on the subject of bad men.

Like other episodes in the series, the Stagger Lee episode includes comments from scholars, musicians, and excerpts from songs. The Stagger Lee songs and folktales are based on this man Lee Shelton who committed a murder in 1895 in St. Louis. The tall tales, songs, and reimagining that emerged following Shelton's crime became crucial to the domain of bad man tales that have persisted over more than a century now.

From a scholarly perspective, I was particularly impressed by the research that Morris did and how she managed to filter my comments and those from her other interview subjects into a short, compact episode. Morris clearly has a talent for gathering large bodies of information, synthesizing what she has learned, and then presenting useful observations and conclusions.

From the perspective of a podcast listener, I enjoyed hearing the mix of speaking voices and music. This episode includes excerpts from Mississippi John Hurt's "Stack-O-Lee" (1928), a prisoner named Bama singing "StackerLee" in 1947, Lloyd Price's "Stagger Lee" (1958), and James Brown's "Stagger Lee" (1967).

At one point, musician and cultural historian Dom Flemons sings a portion of a song featuring Stagger Lee. During the episode, Flemons also provided information on the music and history of music dealing with this bad man.

Marcus Thorne Bagala and Bobby Lord who handle the music and mixing for the series, show skill in what they do. And they also have to be, I imagine, really enjoying themselves. For this episode, they were bringing in music from across varied decades--showing varied styles and genres. They're playing the role of public audio historians.

It's been one thing for me to research and talk to students about Stagolee, Shine, and other bad men over the years. Listening to this episode of "Stagger Lee," though, placed me into a larger conversation and musical experience.