If you check out works by Richard Wright, Ralph Ellison, Ishmael Reed, Charles Johnson, Paul Beatty, Colson Whitehead, Aaron McGruder, and Ta-Nehisi Coates, you'll encounter several bookish characters, who are into reading or whose identities as thinkers are central to the narratives. In other words, these black men writers are interested, to varying degrees, in intellectualism.

At the outset, I should say that I'm aware that not all black men writers share those interests, and I know that some black women writers do. Still, those eight aforementioned writers stand out in my own experiences as a reader and literature teacher, and their collective writings speak to us about how some black men writers have represented and explored intellectual traditions.

I began thinking about these ideas back in 1996, when I took a course on Richard Wright as an undergraduate. There, I encountered Wright's novel The Outsider (1953), and I noticed the protagonist, Cross Damon, was into reading and philosophical ideas. At one point, his group of male friends tease him about his devoted reading interests. One of the guys joked that he once visited Cross, “and I could hardly get into the door! Big books, little books, books piled everywhere! He even had books in bed with ‘im.” The conversation continues:

“Cross, you ain’t never said how come you was reading all them books,” Joe pointed out.

“I was looking for something,” Cross said quietly.

The narrator notes in passing that Cross had taken philosophy courses at the University of Chicago, and he had previously decided against marriage because "ideas had been his only sustained passion."  Of course, The Outsider was not the first time that Wright had presented a character who was engaged in books and ideas. In his autobiography Black Boy (1945), Wright presented himself as a curious and searching thinker from a young age.

Wright and Ellison were good friends, and you see the emergence of a bookish young black man character in Ellison's most famous novel Invisible Man (1952), a work that has had a tremendous influence on many authors, including many black men writers.

These days, when it comes to historically significant black essayists, you're far more likely to hear about James Baldwin than Ellison. Baldwin was offering critiques of American society in ways that make his work relevant to some of our modern-day conditions. Interest in Baldwin makes sense.

Still, Ellison's essays about art and culture, collected in Shadow and Act (1964) and Going to the Territory (1986), shaped or affected the thinking and approaches of so many emergent thinkers at a particular point. The figure who wrote those essays is a literature, jazz, and visual art nerd, and a most studious notetaker concerning what he called "the plastic possibilities of Negro American experience."

Like Wright and Ellison, Ishmael Reed offered some memorable, thoughtful characters. Reed is more outrageously humorous in his novels than many of his predecessors. Raven Quickskill, the protagonist of Reed's Flight to Canada (1976) remains a defining protagonist in the history of bad men in American fiction.

Quickskill is an incredibly smart fugitive slave, and his poem "Flight to Canada," mocking his master, is one of the funniest pieces you'll read about slavery. The intellectualism of Quickskill echoes presentations by Wright and Ellison, and really, Reed's representation goes all the way back to Frederick Douglass. At the same time, the combination of intellect and humor presented in Flight to Canada anticipates Charles Johnson's most known character Rutherford Calhoun from Middle Passage (1990).

As the winner of the National Book Award for Fiction, Middle Passage is Johnson's most well-known work, but he had been self-consciously exploring and interspersing big ideas and humor in his compositions before and after that novel. Johnson began his career as a cartoonist, not a novelist. The comedy central to his drawings foreshadowed the humor that would later appear in his novels and short fiction. 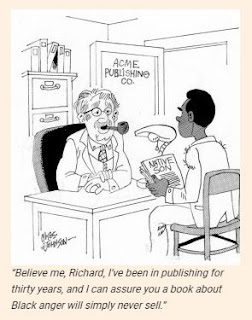 Johnson published a collection of cartoons Black Humor (1970), long before he became an award-winning and critically novelist. His drawings often play with representations of race in American culture. Scholars have primarily concentrated on his novels.

"I began writing novels in earnest in 1970 with one specific goal in mind," explained Johnson, "that of expanding the category we might call black philosophical fiction;  i.e., opening up black literature to the  same ethical, ontological, and epistemological questions--Western and  Eastern--that I wrestled with as a student of philosophy."

Johnson identified Wright, Ellison, and Reed, among others, as leading contributors to black or African American philosophical fiction. When Johnson was awarded the National Book Award in November 1990, he gave special acknowledgement to Ellison, who was in the audience. "In the 1990s," predicted Johnson during his acceptance speech, "we will see a black American fiction that will be Ellisonesque as we as a people move from narrow complaint to broad celebration."

In retrospect, he seemed to be forecasting works by Paul Beatty and Colson Whitehead whose works would appear during the late 1990s. Beatty began his career as a poet, and he made his debut as a novelist with The White Boy Shuffle (1996). That book follows a path traveled by Wright, Ellison, Reed, and Johnson by presenting an exceptionally intelligent black male lead. And like works by Reed and Johnson, Beatty's novel is full of humor.

Whitehead arrived on the scene with his debut The Intuitionist (1999). The intellectualism is there. And there's also humor. Where Whitehead moved in a slightly different direction, though, was by presenting a black woman protagonist. The gender of his character linked his novel to books by several black women writers, but the specific bookishness of his lead character and how he engages some ideas seemed to echo ideas covered by those black men writers.

Ellison died in 1994, and there was some chatter in some circles that publishers were on the lookout for a talented black male writer who would fill the void left by Ellison. Why wasn't that conversation had related to black women? Well, many people viewed Toni Morrison as the one, so to speak. From 1993, when she was awarded the Nobel Prize in Literature up until today, she has been by far the most critically-acclaimed black writer, and one of the most acclaimed American authors overall.

Although in the last several years of her life, Morrison wanted to be viewed beyond only a sisterhood of writers that included Maya Angelou and Alice Walker, she is continually situated within the realm of "black women writers." For that reason, while emergent women writers were linked to or placed in the shadow of Morrison, guys like Beatty and Whitehead were often discussed as part of a tradition of black men writers.

In 1999, the year that Whitehead made his debut as a novelist, Aaron McGruder's comic strip The Boondocks became nationally syndicated. In addition to presenting a black boy protagonist with an extraordinary intellect, McGruder ended up covering an expansive body of ideas in his work over the next couple of decades. As a writer and visual artist, you could, in some respects, think of McGruder as a cross between Paul Beatty and Charles Johnson. He was a intellectually adept comic writer who could also draw.

At the same time that McGruder and Whitehead were receiving national accolades for their works, Ta-Nehisi Coates was quietly plying his trade as a journalist. He wouldn't become widely known until the late 2000s, but he was absorbing the culture, raising questions, gaining experience, and writing and publishing, all of which prepared him for major contributions he would make with "The Case for Reparations" (2014), Between the World and Me (2015), and the comic book Black Panther (2016-present), to name just a few. 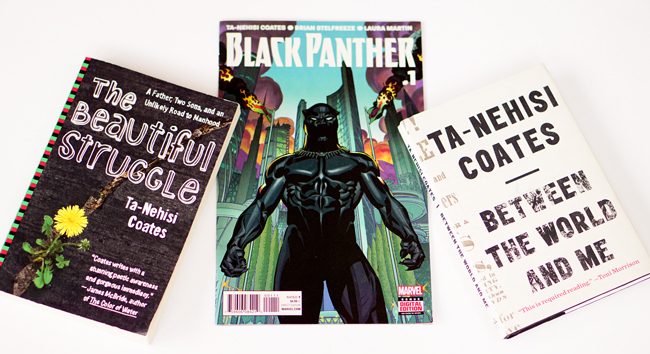 When you read Wright, Ellison, Reed, Ellison, Beatty, Whitehead, McGruder, and Coates,, you'll come across representations of smart black male characters. And, you'll notice that those figures are rarely referred to as "acting white." I guess that accusation began to pop up in more recent times. The guys in The Outsider are amused by protagonist Cross Damon's reading interests, but they don't question whether he's black. The same can be said of Huey Freeman in The Boondocks. Huey's intelligence, in fact, relies on black knowledge.

I haven't really discussed poetry by black men here, and I could. Amiri Baraka. Cornelius Eady. Adrian Matejka. Many, many more. But I think that for better and worse, novelists and series writers like McGruder caught people's attention because of the clearcut representation of distinct characters. There are, of course, characters as the speakers in poems, but popular and critical discourses developed differently around characters in novels and a comic strip like The Boondocks.

Hey, there's so much more to say on this subject of black men writers and intellectual and comedic traditions. And I'm hoping to get to some other issues on the topic soon.

Hi Professor Rambsy,
I read your blog with interest.

May I point out that Ollie Harrington, Wright's last best friend, a journalist and painter was the creator of the well-known BOOTSIE comics series.