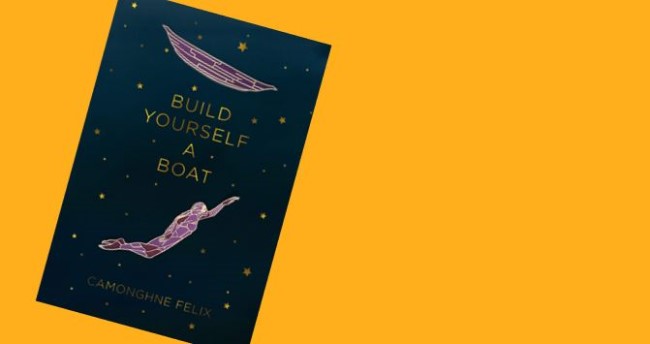 I have often wondered about American skepticism of a phenomenon that manifested in other nations throughout the mid-twentieth century: the poet-politician. Major poets like Aimé Césaire in Martinique, Léopold Senghor in Senegal, and Pablo Nerudo in Chile were elected or appointed to public political roles.1 What would that kind of crossover between poetry and political action look like here?

These considerations were part of what drew me to the debut collection of Camonghne Felix, Build Yourself a Boat (Haymarket Books, 2019). I’d heard rumblings of its genius but hadn’t yet read it when I started seeing Felix’s name in a different context: headlines about her work for Elizabeth Warren’s campaign. She served as director of surrogates and strategic communications from last June until the campaign’s suspension. (Felix had previously worked as a senior communications manager at Ms. Foundation for Women; as Andrew Cuomo’s youngest-ever official speechwriter; and as communications director for the campaign of Chicago mayoral candidate Amara Enyia; and is now Vice-President of Communications for Blue State.) Despite having gone through more typical training pathways, earning an MFA and fellowships from Cave Canem and Callaloo, Felix’s non-poetry-writing “day job” inhabits an atypical form compared to many of her peers. Political strategist is hardly a standard job title for contemporary black poets.

But why not? It does not take much to understand why a poet’s skills might appeal to a politician. As the title of a Times piece opined: “Elizabeth Warren Has a Poet on Her Team. Here’s Why That’s a Good Idea.” The author draws parallels to Obama, whose “speeches were often compared to poetry,” in highlighting what politicians can gain career-wise from the communications talents of poets, given public disenchantment with standard political rhetoric.

Once Warren discussed Phillis Wheatley in her New Year’s Eve Day speech, I knew I had to immediately investigate poetry by the woman behind that choice—especially since Warren’s allusions to Wheatley were less superficial and somewhat more complex than I expected.

The politics of Felix’s own verse are similarly complex, covering too much territory to discuss here. So I want to focus on one poem that exemplifies this young poet’s craft—and encourage everyone to pick up Build Yourself a Boat and see more for yourself.

In a collection dripping with brilliant innovations—prompting Morgan Parker to praise this “fantastically tender book” as “thoughtful in its experimentation”—one poem stands out as especially audacious: “After the Abortion, An Older White Planned Parenthood Volunteer Asks If My Husband Is Here & Squeezes My Thigh and Says, ‘You Made the Right Decision,’ and Then ‘Look What Could Happen If Trump Were President, I Mean, You Might Not Even Be Here” (45–7).

This is the only poem whose printing in a literally unexpected direction requires readers to reorient the book 90 degrees. Reorienting expectations for black women’s sociopolitical responsibilities constitutes a key theme. The titular white volunteer wishes to perform allyship by uttering politically correct platitudes. But her stereotypes seep through so heavily as to fragment the poem, producing ruptures of white space in every line, all of which are thereby broken into phrases of just 1 to a few words each, with enforced gaps between. The speaker thereby formally reinforces the poem’s thematic sense that it is impossible for a black woman to navigate the contradictory expectations imposed by all around her in a way that satisfies coherence.

Felix writes (in a form impossible to reproduce, but see the spacing here: “they need / my colloquial criticalities my totalizing abnormalities my compounds and constructs of trajectory / this is the only how I know to be had I belong to the people but not your people” (45). This “they” encompasses virtually everyone, from the white volunteer, to the speaker’s black fiancé, to the politicians for whom the speaker mentions working. This external “need” yields a sense of obligation, the compulsion to include near the end the somewhat positive lines: “I did my best I worked with what I know I tilled I paved I / foraged labored a land / got us some growth” (47). These evoke the optimism of the collection’s title: if nobody else will build a boat, black women must do it for themselves. But this poem’s nuance—about elections, about abortion, and about performative relationships between white and black women—does not end there. Instead, the speaker concludes: “left all of us / famished bloody hungry at war” (47).

This text wars fiercely and tenderly against so much, addressing equally subtly the personal and the overtly public. Read it for yourself, to see how our politicians (particularly right now) could benefit from far more than hiring poets as strategists. They could benefit from actually reading and meditating on the complex alternative visions of black poets like Felix.

1. Willie Perdomo writes in his introduction to The BreakBeat Poets Vol. 4: LatiNext (Haymarket Books, 2020) of Chile today that “it’s a poet’s country” where “[t]axi drivers and hotel clerks are well-versed in Neruda,” and poems are “dropped from helicopters like bombs” (1).

Related:
• A notebook of entries by Laura Vrana
Posted by H. Rambsy at 11:28 AM