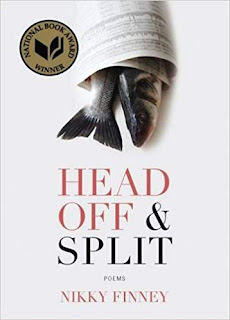 Back in 2011, I thought that Nikky Finney's sonnet sequence "Plunder" was one of the big events in black poetry that year. In addition to expanding the realm of African American sonnet sequences, Finney's poem stands out for taking on a particular cultural figure.

Despite the fact that we often say poets are political, we have relatively few extensive treatments by poets of living governmental figures. I'm accustomed to biting zingers about presidents. Like in his short poem "Memo to Bush 2," Amiri Baraka goes, "The main thing wrong with you is, you ain't in jail." So there's that.

But Finney went further by producing this extended mediation on Bush and how, speculatively, his inner mind works. So often, we come across pieces focusing on the consequences of powerful men's thoughts and actions. But here, with "Plunder" we got someone working with the history and the motivations, the public and the private.

The length of the poem may be one reason that the piece has not gained more attention. Poems of that length don't appear as much in anthologies, so it's difficult for them to be passed on to different generations of readers. Too, the poem -- or series of poems -- does not fit neatly into our typical definitions of black poetry, which is to say it doesn't celebrate black culture, doesn't proclaim love for black women or black music, and doesn't even make outward defiant protests against anti-black racism.

Early on when I was pursuing research for what would become my upcoming book, Finney's "Plunder" was one of the many artistic compositions that I thought about that used a bad white male figure in part as a muse. My writing for the project ultimately focused on primarily black male figures. Still, I keep returning to this extended mediation on Bush by Finney and thinking what it means to produce work like that.