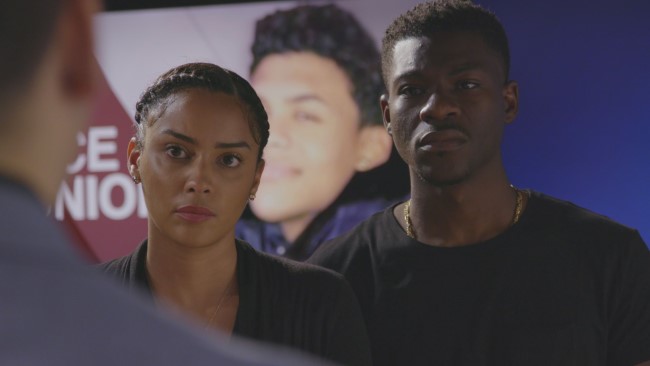 Last week, I was thinking that one of the toughest challenges that Dometi Pongo had encountered as a journalist was coveraging of the case of Kenneka Jenkins. But after watching him this week's
True Life Crime on MTV about the murder of Lesandro 'Junior' Guzman-Felizn, I'm not so sure. Maybe this was Pongo's biggest case. Or maybe it'll be next week, or the next.

When it comes to Junior, what a terrible crime. In 2018, a Dominican gang brutally killed this 15-year-old boy outside a bodega in the Bronx. I was visiting New York around the time the incident took place, and it was all over the news. I continued following it, though I was deeply disturbed by what happened.

I'm really glad that Pongo shined new light on the case and gave some attention to Junior and his family beyond the killing. Too often, all we hear is that some black or brown person was killed. That's all we know about the person -- that they were murdered. But Pongo and his crew for MTV True Life Crimes have been working to talk to families and friends about who the person was -- how the person was full of life, laughter, and dreams.

It was really difficult to watch this episode, and so I can only imagine how unbearable things must be for the family.

I can't stress enough how important it is for a show like True Life Crime to delve into the complexity of violent crime in black and brown communities. If you ever wade through the dozens of shows, especially all those popular podcasts, about crime and murder, you'll mostly encounter cases involving white people. You might fail to consider what's happening with others out in these streets.

Too, many white liberals have a tough time getting involved in cases that deal with people of color as the victims and perpetrators. Those liberals don't want to be accused of pathologizing certain racial and ethnic groups. Hence, they remain silent.

Thankfully, Pongo doesn't feel restrained in that way. He goes in respectful, and he raises questions and provides coverage that prompts us to ask additional questions and come to new realizations with these cases.

There's a moment in this episode where Pongo makes a point about what he was witnessing first-hand with gang violence and streets codes in Chicago, and he asks someone from the Bronx if it's like that out here in New York. That's a crucial challenge and contribution that Pongo is undertaking -- connecting the dots about violence across distinct kinds of communities.