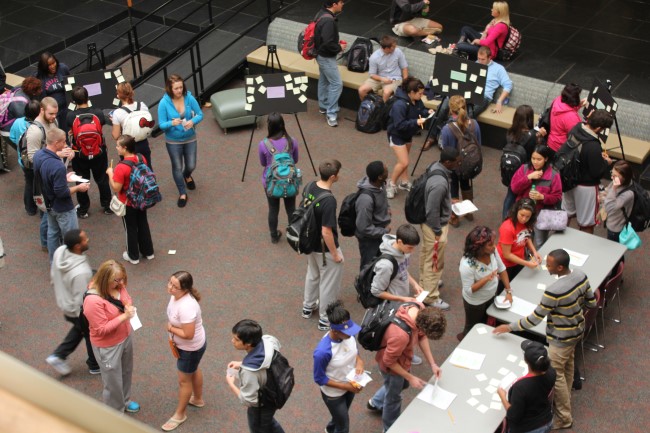 I was honing my skills with public humanities projects since before I arrived at SIUE in 2003., but 2010 marked an important moment for clarity for me. I had finally gathered enough materials and know-how to really mount a wide variety and series of public projects by the fall of 2010. That was the first semester I coordinated about two programs every week of the semester.

It was crucial, I thought, for me to have that standout semester, as I would be on sabbatical in spring 2011. I was directing Black Studies, and I did not want the program to disappear just because I would be away. (There were some administrators quite hostile to Black Studies at the time). So fall 2010 was an important foundation.

With the various programs I coordinated, I was often thinking about getting students involved in educational activities beyond the confines of traditional classrooms. At some point in my collegiate journey, I realized that I had been under-exposed to art galleries and museums. So I was motivated to design various exhibits, which have become integral to all my projects.

While on a trip to a museum in the late 2000s with students, I encountered those listening devices that some places use. I decided to acquire some for my own exhibits. Thus, audio exhibits or mixed media exhibits became central to my projects as well. I moved from those those audio devices to touchscreens.

I was initially organizing exhibits in various places on campus. In the summer of 2010, however, I convinced the library to give me access to an unused room on the third floor. I named that space the Eugene B. Redmond Reading Room, and hosted mixed media events there. University officials saw and liked the idea of an EBR Room, and as they began fundraising efforts for the development of a larger space, they asked me to change the name of my room. I did, renaming the space the Underground Reading Room. That small space on the third floor was the prototype for what is now the Eugene B. Redmond Learning Center, which opened in 2015.

In recent years, I made the library my central space for programming. The open space on first floor of the building and the EBR Learning Center on the second floor have become two of the most common places for my projects.

I was fortunate to have so many different talented crews of graduate students and undergraduate contributors. They were helping me think up the ideas for interesting programs, and they were also involved in the labor of assisting me assemble and carry posters to and from events.

My decision to launch a blog in 2008, was another key factor for all of my programming. The Black Studies blog, which transformed into Cultural Front, gave me an opportunity to document and display our activities. With the blog, I've had this place to publicize, record, and reflect on what we were doing.