Day 2, July 9, of our institute included a keynote lecture, sharing and learning activities, and breakout sessions for more concentrated discussion.

We began the day with a recap and exploration of key topics. That session of was led by Tisha Brooks and Elizabeth Cali. They had given the participants a chance to jot down their thoughts at the end of the previous day, so that we could begin the day recalling various unanswered questions.


Next up, Joycelyn Moody  led the day's keynote presentation. She began the session by having the participants break into small groups and identify the books that they first read by African Americans and the grade level at which they did so. She then asked the groups to identify autobiographies that they read.

Moody then covered a wide range of issues pertaining to African American autobiography and literary history. She gave participants extensive information, and took some time to discuss select passages from Douglass's Narrative. 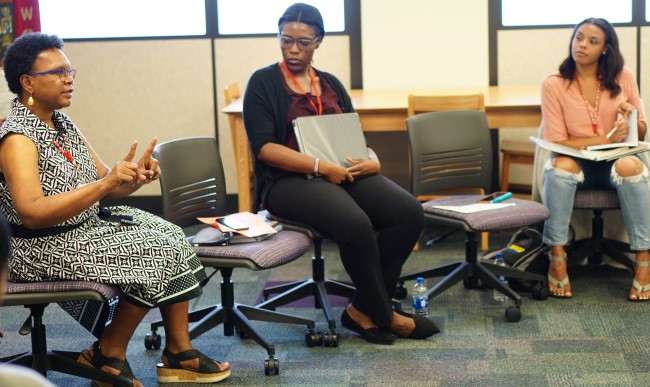 During the afternoon, Moody led a breakout session, where participants discussed different texts, including Evie Shockley's poem “The Lost Letters of Frederick Douglass."

Kristine Hilderbrandt led another of our breakout sessions. She introduced participants to various map-making tools such as Google Maps, Google Earth, and StoryMapJs to explore geographic elements of Douglass’s Narrative.

She discussed how mapping software assists readers in understanding spatial and temporal connections in Douglass's book.

Later in the afternoon, I curated an exhibit of different Douglass editions. To conclude, Jessica DeSpain and I led a short discussion about Book History and Douglass's Narrative.

Related:
• A notebook on Frederick Douglass and Literary Crossroads NEH Institute
Posted by H. Rambsy at 6:37 AM