Brooks and Cali coordinated activities in the morning. They opened discussions of the Narrative with an important question: When teaching Douglass or other works for that matter, how do we converse about the violence of slavery without reproducing that violence?

The question led to various other questions and a useful discussion about the challenges we face covering the brutalities present in works about slavery where so many black people are beaten, killed, sexually assaulted, and tortured. 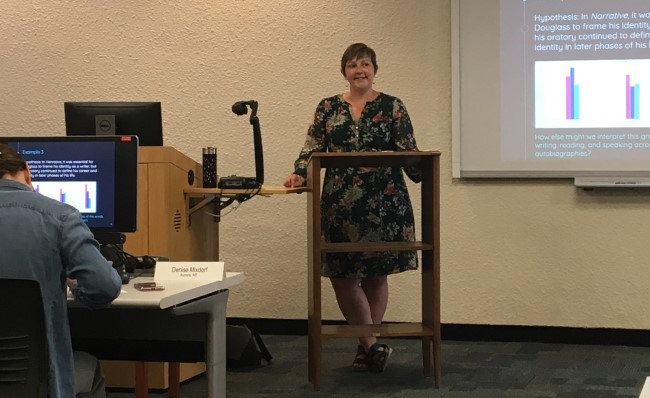 For our afternoon sessions, DeSpain and Anderson led workshops with smaller groups, or breakout sessions. In her session, DeSpain covered what is known as "distant reading." She discussed using Voyant, a text mining tool, for analyzing Douglass’s Narrative and other works. As an example, she talked about findings she made based on a corpus of 290 slave narratives.

The session raised the possibility of using digital tools to consider patterns associated with word usage and content. More generally, the session was about encouraging teachers to think about ways of utilizing technology to engage Douglass's Narrative.

Jill Anderson focused part of her session on Common Core standards and the place of Douglass's text. She expanded and also presented various materials she has developed and shared with teachers in training over the years related to Douglass.

Anderson provided a trove of resources for approaching Douglass. Those resources were really beneficial since teachers have been asking materials that they can share and re-purpose for their students.

Related:
• A notebook on Frederick Douglass and Literary Crossroads NEH Institute
Posted by H. Rambsy at 6:24 AM