How Bryan Hill diversifies our views of villainy 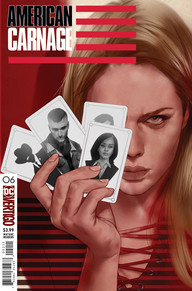 Listen: Bryan Hill really brought it with American Carnage #6, the latest installment in his crime thriller about a an undercover bi-racial FBI agent seeking to infiltrate a white supremacist group. This latest issue is particularly haunting because of the opening pages where this leader, Wynn Morgan, is calmly discussing white superiority.

"We [white people] are the people who have brought civilization to the world. Civilization is our tradition and they want us to be ashamed of that," says Wynn. Later, he notes that "their ancestors worshipped trees. Our ancestors understood the language of the stars."

In many cases, comic book writers, as well as many poets and novelists, discuss villainy and heroism in metaphorical and analogous terms. By contrast, Hill takes a literal approach with the opening from Wynn. This isn't a villain talking about taking over a city or the world. This leader is instead asserting "white civilization is the mother and father of the world."

The comic book is drawn Leandro Fernandez and colored by Dean White. The images for the book complement some of leader's commentary. When Wynn states that "We know what happens when lands are denied our civilization," we are shown an image of malnourished, presumable Africans.

Another image shows brown people, perhaps Mexicans, detained as they seek to gain entry into a country. The image complements the statement that "when their lands are broken by their culture, they come to ruin ours."

So often when folks speak of the value of "diversity" in comics books, the conversation concentrates on how having black superheroes is important for young black people. Black Panther gives African American children and adults a sense of racial and cultural pride, for instance. All of that's true. But Hill offers a reminder that there are additional outcomes.

What if an exposé on the mind of a leading white supremacist is a another diverse contribution that a black writer capably brings to comic books? Celebrations of black people and culture are important aspects of diversity. However, Hill additionally demonstrates the importance of uncovering dimensions of whiteness.

I started reading Bryan Hill back in 2017, when he was writing Wildstorm: Michael Cray. After that series, I checked him out on Killmonger, and I  went back and got the trade paperback for his run on The Outsiders. With Michael Cray and Killmonger, I had been thinking about the important ways that Hill presents bad men, bad black men characters. But with this representation of Wynn, Hill raises the stakes on treatments of bad (white) men.

American Carnage includes various kinds of troubling white men, such as low-income white people who express animus toward black people. Those characters are notably different from the wealthy and powerful Wynn, who is more philosophical and calculated with how he expresses disdain for non-white people and non-Christians.

Given his wealth, political ambitions, and embrace of whiteness, Wynn no doubt invokes the real-world notion of Donald Trump. But Wynn appears less impulsive and reckless. That makes him a little scarier.

Wynn's measured discussion of white supremacy doesn't come off like the Twitter-ramblings and dog whistling of a con-man. His comments are also not like those typical villain monologues about world domination. He is rather dispassionately and surgically explaining why certain kinds of white people are destined to rule.

It's not everyday that you come across a comic book character so plain-spoken in discussions of white supremacist ideas. In this way, Hill diversifies our views of villainy.