I've given versions of this lecture many times over the years. I tell folks in the class about this legendary student, Dometi Pongo, who arrived on campus back in 2008 or so. He was a poet, he was a rapper, an organizer, and most of all an active thinker. He  and I were constantly talking about black consciousness and making moves.

I tell the young'ins in class about these notebooks he kept and eventually shared with a group of us that were full of rap lyrics that he had been composing since he was in middle school. Then, there were the on-campus talent shows. I tell the story of hearing students competing for second place, because, as they'd say, "there's no question who's gonna win first."


All of these stories are the lead-in to the Malcolm X Mixtape -- one of the greatest student projects I've ever witnessed. Back in 2009, my students Adrienne Smith, Al Henderson, Pongo, and me came up with the idea of producing a black studies project. We wanted to make something to raise consciousness and distribute it among the masses of the people on campus. Back then, in our minds, the best way to do that was through the production of a mixtape.

Over the course of a few months, Pongo collaborated with producers and lyricists in Chicago to come up with the tracks for the 11 tracks on the mixtape. The tracks are linked by a common thread: Pongo inserts excerpts from Malcolm X speeches at the beginning or end of each of the tracks.

We released the the Mixtape in March 2010. We held listening events and distributed the music on flash drives. The responses were positive and enthusiastic. 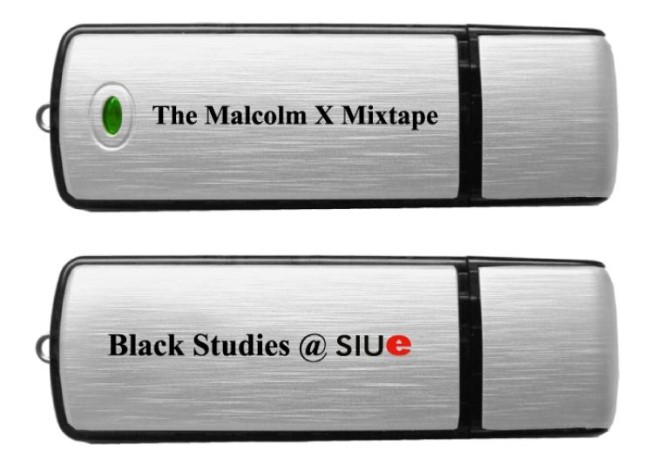 Henderson created a series videos based on tracks from the mixtape. So folks who purchased the drives were treated to music and a selection of videos.

The production of a mixtape energized us and gave us all kinds of new ideas about the possibilities of producing collaborative artistic projects. Pongo had additionally modeled what it meant to work with various artists on a single project.


When Ta-Nehisi Coates visited our university in 2011, Pongo was part of a small group of students I gathered to meet with the author before his public talk. Coates signed Pongo's copy of The Beautiful Struggle, and in turn, Pongo gave Coates a copy of The Malcolm X Mixtape.

Over the years, I've introduced selections from the Mixtape to my classes. The young black men I work with have been especially interested in the composition. Their interest in "conscious" rap draws them to the project. In addition, they are moved by the idea that someone who, as I note, "sat in these same classrooms" could produce such a powerful project.


This semester was the first time I shared the Mixtape project with students since Pongo has been in his job as host of MTV News’ “Need To Know” program. It added even more interest to know that the lyricist who produced the Malcolm X Mixtape is now a journalist for MTV.

Related:
• A Notebook on Dometi Pongo
Posted by H. Rambsy at 9:23 AM