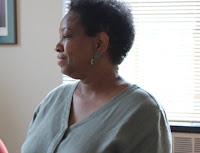 Many aspiring professors to college after high school. Well, Lovalerie was initially working to support her younger siblings and then her children and later still her ailing mother. So she first completed her undergrad degree after she retired from decades of work. She pointed those things out to me not as a way of showing she was exceptional. Instead, she wanted me to get a sense of where she was coming from, and why she carried herself as she did, sometimes at a distance.