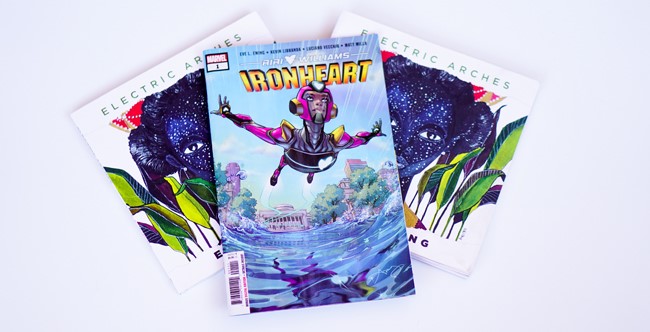 One of my favorite moments from Eve L. Ewing's Electric Arches (2017) is the introduction. There, she's reflecting about how she used her imagination as a child. "As I rode my bike, I would narrate, in my head, all of my adventures," she writes. "In my head I was shooting arrows, exploring dungeons, solving mysteries."

She noted that she did all this imagining within her one neighborhood block, which "became the backdrop of infinite possibility."

I was thinking on those infinite possibilities while reading Ewing's debut on Ironheart. The move from poetry to comics is a big leap. Then again, the idea of imagining in far out ways might not be that big a leap when thinking about aspects of what Ewing's doing.

Too, we've had a few other templates for writers moving from one genre to comics. Remember, Ta-Nehisi Coates was reporting and blogging, and now he's writing Black Panther and Captain America. There's also Evan Narcisse, who was well known for writing about popular culture, including comics and comics news, and then he did a limited series run Rise of the Black Panther. Victor LaValle and Nnedi Okorafor have written novels, and also comic books. There are others.

So Ewing is linked to those figures in various ways. She's also breaking new ground by exploring a character we've only seen in small doses. Brian Michael Bendis created Riri Williams in 2016, so not that long ago. Now Ewing will have considerable room to decide who Riri/Ironheart is. She'll also have more room to explore more infinite possibility.