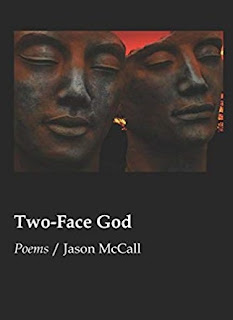 On August 17, 2014, just 8 days after Michael Brown was shot and killed, Jason McCall published "Roll Call for Michael Brown.” The poem imagines scenarios years from that moment when the name "Michael Brown" would be uttered during roll call at school and in other situations. McCall was imagining how we might think of Brown in the future.

These days, people link Afrofuturism to African American displays of technology, like the advanced, futuristic society of Black Panther's Wakanda or to the science fiction sonic explorations of Janelle Monae. That all makes sense. But there are also threads of Afrofuturism concerning simply how black people imagine future moments. That's what we get with some of McCall's writings on black boys who were killed.

I was just re-reading his poem "Trayvon's High School Reunion," which was republished by the Verse Daily on June 22. The poem appears in McCall's Two-Face God (2017). Similar to "Roll Call for Michael Brown," this poem on Trayvon Martin envisions a future moment when people will consider his death.

As the title indicates, McCall's poem considers what the high school reunion of Martin's class will entail. For one, the organizers of the event will send "a last minute email / to the caterers to keep the Skittles / off the snack table." In addition, they'll "tell the DJ to scratch / over all the gunshot adlibs." These are some of the details to consider years or decades from now for people who remain mindful of Martin and the specifics of his circumstances.

Alondra Nelson, the scholar who really advanced Afrofuturism early on, once wrote of "past-future visions," where artists look back and re-imagine the past. By contrast, McCall's approach might be thought of as future-past visions, where his poems prompt us to consider historical moments many years from now when we'll think back on those black boys.

In this way, McCall's poems are afrofuturist, but not in the ways typically associated with that concept. McCall jumps forward into the future to speculate on how we'll recall a troubling past.

Related:
• A Notebook on Jason McCall
Posted by H. Rambsy at 9:42 AM