It's not every day that you get to bring together a group of twenty-five 18-year-old black men beginning their journeys at SIUE with an 80-year-old black man who graduated from the university many decades ago. But here we were: my class of first-year students meeting with Eugene B. Redmond. I was hosting him as part of his birthday celebration.

Redmond turned 80 on December 1. There was a celebration in East St. Louis on Friday. We extended the festivities today by having Redmond give a public reading and discussion at the university library with students from my class.

Redmond read some poetry and had a few visitors read. Just as important, he reflected on his many decades of adventures and travels. 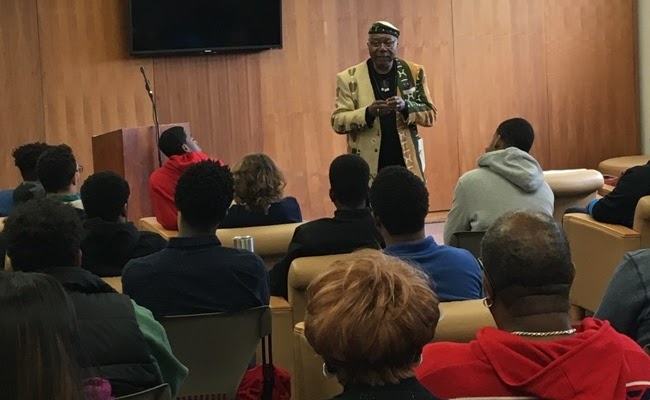 I enjoyed taking a moment to think on the spans of time between Redmond and the guys in my class. Redmond was born in 1937. My students were born in 1999. Redmond began taking classes at Southern Illinois University (then located in East St. Louis) in 1957, and my guys started in Edwardsville this fall in 2017. All kinds of twists and turns between them, but here we were, together.