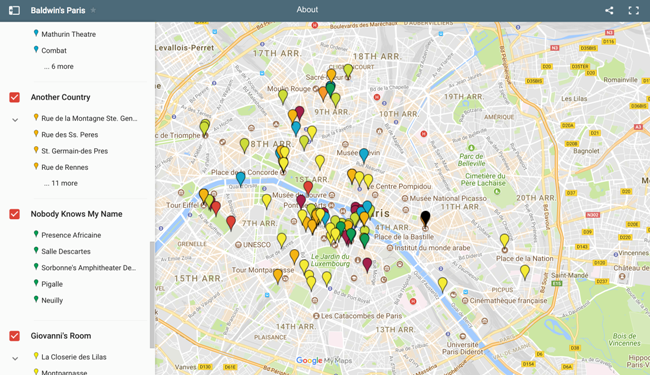 During my last class at the Dallas Institute, we spent time discussing Baldwin as an expatriate. To aid in our conversation I drew on Tyechia Lynn Thompson’s “Baldwin’s Paris.” The website “is a geospatial literary tool made up of over one hundred placemarks” that are “references James Baldwin has made to buildings/monuments, restaurants/cafes, arrondissements/areas/street names, and residences in Paris that appear in three novels, six collections of essays, and one short story collection published during his lifetime.”

The various locations plotted on the map guided our conversation on Baldwin and helped us better assess how Paris existed in the writer’s literary imagination. Even though the country of France is vast, we were able to pinpoint recurring locations and various neighborhoods that Baldwin seemed fond of in his works. The map provided an avenue for us to compare Baldwin’s movements across the country with those of his fictional characters.

Baldwin, like various other writers and artists during the 1940s and 50s, moved to Paris to escape institutional racism in America. Ellery Washington, writing for The New York Times, explains that “During those early years he stayed in France because, as a black man, he perceived that the ruling-class whites there simply left him alone,” and in Baldwin’s assessment “that’s what allowed him to develop as a writer.”