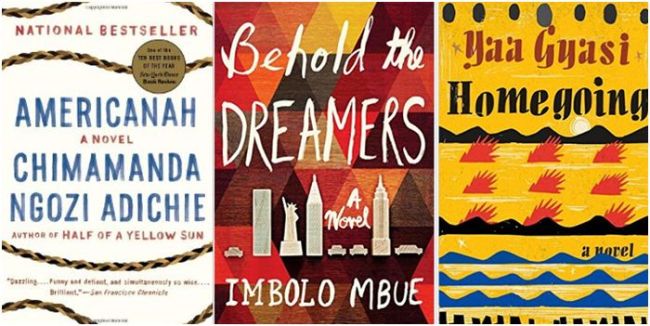 Over the last few years in particular, publishers have signaled their willingness to make large investments in the future of novels by African women. They've offered tremendous support to Chimamanda Adichie, Tomi Adeyemi, Yaa Gyasi, Imbolo Mbue, Helen Oyeyemi, and Ayobami Adebayo. None of those writers, by the way, are over the age of 40.

Do the investments by publishers point to where the market is headed in terms of black women's writing? Or, is the investment only temporary? What difference does it make that the publishers (and the contemporary literature market?) seem to prefer African woman writers over U.S. black women writers?

First, Chimamanda Adichie really established herself as a prominent novelist over the last several years. Her novels Purple Hibiscus (2003), Half of a Yellow Sun (2006), and Americanah (2013) .Her TED-talk, "We Should all be feminists," gained widespread popularity after Beyonce sampled it on "Flawless," and Beyonce's apparent promotion contributed to strengthening Adichie's reputation, and book sales. Perhaps Adichie's success in the contemporary era paved the way for others?

The early coverage on Mbue pointed out that Random House paid a seven-figure advance for the rights to publish Mbue's debut novel, Behold the Dreamer (2016). The novel was selected for Oprah Winfrey's Book Club in 2017. Gyasi was on a similar path. As noted in Mother Jones, Gyasi's work, "sparked a bidding war and landed her a seven-figure contract just one year after her she graduated from the Iowa Writer’s Workshop with a draft of the manuscript in hand." That is, Gyasi received over $1 million prior to publishing her first book. Publishers were betting on her promise.

Knopf published Gyasi's Homegoing in June 2016, and the company will publish Ayobami Adebayo's Stay with Me this fall. At the age of 23, Tomi Adeyemi, or more accurately her agent, secured a book for her young adult African, fantasy trilogy. The film rights to the trilogy's first book, which hasn't been published yet, has been purchased by Fox 2000.

Back in 2014, Felicia R. Lee touched on some of these topics -- African vs. African American -- in her article "New Wave of African Writers with an internationalist bent." One reason the subject hasn't gained much discussion yet in the realms of African American literary studies is because the field primarily concentrates on historical popular works and canonical authors, not contemporary authors.

So, in American and African American classrooms, students will continue to encounter U.S. black authors, none more than Toni Morrison. But, what I predict moving forward, is that readers who keep up with contemporary literature, will notice more titles by African-born writers, including Adichie, Adeyemi, Gyasi, Mbue, Oyeyemi, and Adebayo.

Related:
• The Oprah, Beyoncé and Adichie Effects on Black books
Posted by H. Rambsy at 8:59 AM

Well, what's the difference beet wen man writer or a woman writer? Especially if the conversation is about the human race. It seems to me that if a person is creative, he can be any outside, the main thing what is inside of human. What ideas he or she is full of, what he thinks about. And then it's your business, if you want to follow him, go ahead become his fan! If you do not like his creativity, just pass by. It's always easier to criticize someone. For example, I wanted many of people start to following me, and they become my fans, I wanted to be a celebrity in the internet, you know... And do you know what I did for this? I started writing with the bookwormlab. I had a small circle of fans, and then more and more. Now I have about a thousand active readers. So it's not important whether you are black or white, the main thing is that you are a person!

Thanks for reading and posting.

Well, that's a start. But where does one go from there? I mean, in a room full of persons or people how do some distinguish themselves from others? Some of them are from here, some are from over there. Some have these experiences and perspectives, while others have these talents, good ideas, interests, and dreams, and so forth.

So, I wouldn't even say the "main" thing is that you're a person. It's one thing, among many other important things. Race and gender and sexuality and socio-economic status and language(s) and geographic location and on and on and on are also main things.