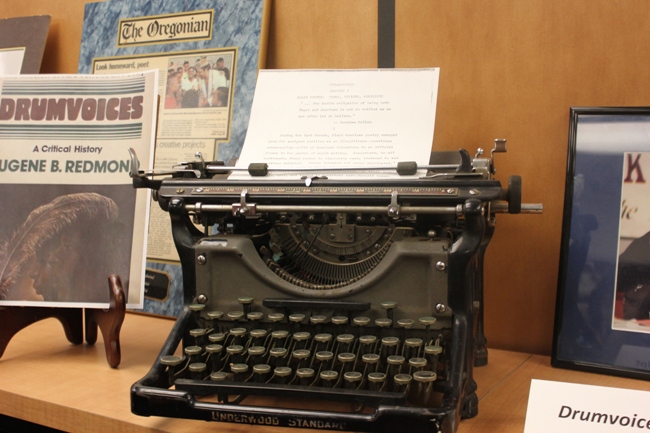 In the early 1970s when Eugene B. Redmond submitted his short manuscript on poetry criticism to a publisher, he received a rejection. The editor of the series, however, did offer one memorable compliment. The bibliography, he informed Redmond, was really good.

That was it. We regret to inform you we can't publish the manuscript, but your bibliography? That has promise.

Redmond went back to the drawing board, and spent the next several years revising and extending his manuscript. What he published -- Drumvoices: The Mission of Afro-American Poetry (1976) - is arguably the single greatest study on black verse.

In retrospect, it's really a good thing that Redmond received a rejection at that early stage. That initial manuscript may have been one-fourth the size of what he eventually produced. If he had published that relatively short work, he may have moved on to other projects, and we might have been deprived the opportunity of encountering Drumvoices.

I often recall Redmond's story to me about the early version of his manuscript, and how the most memorable favorable comment it received concerned the works he cited. His citations signaled a far-reaching body of poetry production, and just as well, the items that Redmond cited showcased the activities of publishers, editors, and even people producing audio recordings of poems.

It was one thing to read and listen to the works of various poets. It was something else to gather, arrange, and document lists of their productivity, in other words, to create an extensive bibliography. All of that was what Redmond was doing during the late 1960s and early 1970s. And this was more than two decades before his prolific activities as a photographer.

These days, many people know Redmond for his production of well over 100,000 photographs of poets, novelists, musicians, entertainers, and cultural events. In his pre-photography days and even prior to establishing himself as a poet, Redmond was a journalist--reporting and editing newspapers and even co-founding publications in his hometown East St. Louis.

Redmond's identity as a journalist combined with who he was as a poet, professor, and scholar converged and shaped his approach to collecting materials and ideas about African American literary histories. So even though his ideas on poetry in those initial stages of his manuscript were not fully formed, he possessed the ability to produce a brilliant, promising bibliography, which formed the basis of the drafts that eventually became Drumvoices.