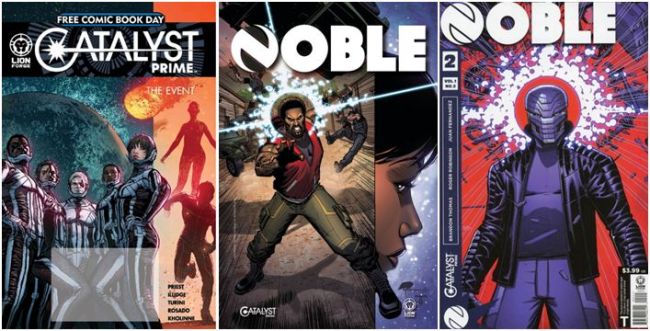 Too often diversity in comics means the insertion of just one or two people of color in a primarily white universe. No cultural context for those one or two, just their appearance. Thus, among other things, the cultural and geographic diversity in Noble caught my attention.

I first heard about the launch of the Catalyst Prime universe and Noble from the Twitter feed of editor Joseph Illidge. I've only been following him for a little over a year now. He's been a great a resource for news on information emerging in the industry of comic books. He's been especially persistent and helpful with comments about diversity in the field. At some point, he tweeted that he was working on a project with Lion Forge comic book publisher, and I took note.

So far, I've read Catalyst Prime: The Event, Noble #1 and #2, and Accell #1. I'm intrigued with where this universe is going. For Noble, the story concerns David Powell, who possesses superhuman strength but at the moment has hardly any memory of who he is. He first appeared in The Event as part of a crew of astronauts trying to save the Earth from an approaching asteroid. Ok, but now at some point in the future, David's going under the alias Julian Brass. His wife, Astrid-Allen-Powell is trying to find him.

In The Event, written by Christopher Priest and Illidge, we encounter characters who are Mexican, Asian, African American, and white. We view settings in an un-named rundown city, Mexico, space, at a planetary telescope in Puerto Rico, on a beach, in a laboratory, and in a corporate office. The characters and settings provided a basis for Noble, written by Brandon Thomas, illustrated by Roger Robinson, lettered by Saida Temofonte, and colored by Juan Fernandez.

The opening settings for Noble are in Houston, Texas, and the Province of Jujuy in Argentina. In one early scene in the Powell's home, we see something rarely depicted in comics: photographs on the wall of an African American family. We're being subtly put on notice that these black folks have some history. They aren't those token black people who appear out of nowhere in comic books, commercials, movies, and sitcoms.

In Noble #2, we see a medical doctor, DeMarcus Mayes trying to save David's life, who is on an operating table. We quickly move to scenes with David in El Alto, Bolivia. When we encounter Astrid, she's asleep, and when she wakes, we learn she's on a air plane, which she soon parachutes from landing in Argentina apparently in pursuit of David. The issue closes with doctor DeMarcus, who is now working as trauma surgeon under the alias Leonard Epps in Campeche, Mexico.

I'm curious about why DeMarcus is passing as Leonard in Mexico. I'm wondering what's up with David, and who is Astrid, comfortable jumping out of planes and interviewing Argentinians about the whereabouts of her husband. All of that is to say, Noble has me looking forward to the next issue. Just as important, I'm impressed with how Priest and Illidge with The Event and Thomas with Noble constructed narratives where cultural and geographic are integral to the world building, not simply add-ons.

Related:
• Coverage of Noble
• A Notebook on comic books
Posted by H. Rambsy at 8:48 PM