The good news and the trouble with black poetry 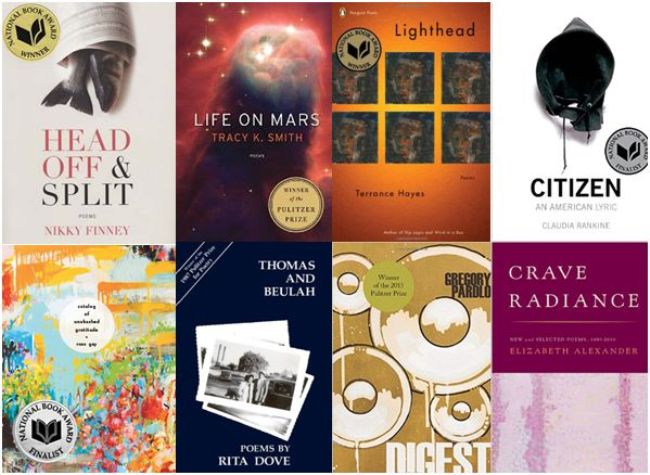 Just six months into 2017, and there's been all kinds of good news with black poets. Vievee Francis was awarded the Tufts Poetry Award. Tyehimba Jess was awarded the Pulitzer. Kevin Young was named poetry editor for The New Yorker, and Terrance Hayes was named poetry editor for The New York Times Magazine. Tracy K. Smith was named U.S. Poet Laureate, and the folks at Poetry magazine, among many others, are doing important work to celebrate Gwendolyn Brooks's centennial.

For one, consider a finding from Juliana Spahr and Stephanie Young. They revealed that from 2004 - 2015, "24,000 MFAs were awarded for around 900 possible jobs." That's not a good look for the field of poetry. Between 1975 and 2015, universities established 300 creative writing programs. Those programs were not created because those institutions love poetry.  Rather, Spahr and Young observe, universities understood that those writing programs "are cheap to run" and "tuition generating."

When it comes to black poetry, we can count a large number of successes with awards and with academic appointments over the last 20 years in particular. We can't, however, point to as many well-funded black poetry programming projects for young people. It's been more likely for select black poets to receive prizes over $10,000 than for entire communities to receive that support for black literacy or black literary art programs.

And even though there are many scholars out there doing good work on poetry, we have to say those numbers are small in comparison to various other areas. There are some "special" issues on poetry in scholarly journals, but editors will tell you that they don't receive many articles on poetry with their regular submissions. My general sense is that many scholars aren't necessarily opposed to poetry, but they tend to devote their research and writing energies to other things.

And there's more -- a nagging sense of intra-racial class discrepancies in African American poetry (sure, it's probably in all of poetry). You get a glimpse of the discrepancy when you consider how much funding has come to what some refer to as print-based poets vs. spoken word artists or simply poets who reside outside certain influential networks.

So how do we reconcile the troubles and good news concerning poetry? First, we'll have to do better about accounting for what's happening. So far, we've done better circulating information about the good news. Many people sent me emails about this or that poet winning an award. Folks are silent about the challenges so many aspiring poets face or the absence of adequate programming on the arts in low-income communities. Those of us who study the arts and who live and work in black communities will want to address some of these issues more thoroughly.

I will briefly make a remark and write more later. First of all, there are critical books about contemporary poetry; most of what i've seen happens to be by the poets themselves, a rare treat. Who is the most qualified, after all, one might ask, to write a scholarly work on poetry?? Well, maybe not; that is a huge discussion. But there have been critical works written by Evie Shockley, Fred Moten, Nathaniel Mackey, and Claudia Rankine, among others. Seen these?

For the last three or four years (Since I retired from a twenty three year teaching career where I advocated for more literature in English high school curriculums), I've een reading many "Cave Canem" poets,both members and mentors (many of whom I'd read earlier ie- Gwendolyn Brooks, Cornelius Eady, Yusek Koumenyakaa,Nikkey Finney and others. Some of my favorites include Tyehimba Jess, Patricia Smith,Morgan Parker, Major Jackson and others.
I have also been writing a series of haikus about the ongoing murders by police of black men and women. The Philandro Castille decision, for me, seems to set a nightmarish precedent that gives ghastly advantage to police in that they can get off for sheer murder by saying they were "triggered by fear". Stupid me; I always thought Trigger was a bright white horse owned by the very white Roy Rogers with a very white show back in the day.When Trigger perished from old age, Roy had him stuffed. But where are we when more and more black poets are writing utterly fantastic poetry such as the latest books by Tyehimba Jess Morgan Parker,and Patrica Smith ( Incendiary Art), yet in one weekend, by news reports, 180 young people July 4th weekend were killed?

Thanks for commenting. Yes, I'm familiar with the books by Shockley, Moten, and others you mention. Those books are important. Full stop. The numbers of those works on contemporary black poetry are small in comparison to what we've produced on Black arts poetry.

I know. just when I think I'm "caught up", there's yet another poet in the new poetry section of my local library. Now, when you say you've read Shockley, Moten and others, do you mean their scholarlyl works, such as Shockley's Renegade Poetics and Moten, with Stefano Harneey, Undercommons: Fugitive Black Study Planning? I have not yet read either of them because, believe it or not, thee Commonwealth system of libraries here in the state of Massachusetts does not have a copy of either book although the librarian says it is in the catalogue(s) of all the colleges in the state of Massacchusetts, considerable feet, trochees and all( so something is a foot here, with some stress too).
Have you read Shockley or Moten's poetry? Curious.

Im sorry this is so late but my weird computer disaopeared some of my places where I was writing for a few years and I was ( still am) not savy enough to retrieve what I wrote. But IA have been following many Cave Canem poets for at least the last fifteen years, an more recently, even more Cve Canem poets and other nonaffiliaed Black Writers, Asian American writers in Kundiman and everywhere elseI can find them, and thesame Chicano/ Chicana. Latina/x, and Native American and other poets. I can
The amount of terrific wrtiing from all over the worldl is asonishin and I hope to contribute soime reaing lists and my own ficion and poetry some of whih can ve found on my blog PAaging The World on Word Press.co Enjoy tlak with you some more. I have read very little of Fred Monten's poetry but he's on a lis that I am working my way through. AI've red almost everything by Patricia Smsith and Fred Kearney- I would say they are my two favroe Cave Canem poet. I also like Jamal Johnson, AV ordan, Morgan Parker, Evi Shockley (haventread her theoretical work yet), and especially Tyheimba Clarks seensationalll Olio) for scope daring and sheer exhiliraion of imaginaion. WOW! is all can say but give me moere time.