Some notes on "Twitter and Tear Gas" by Zeynep Tufekci 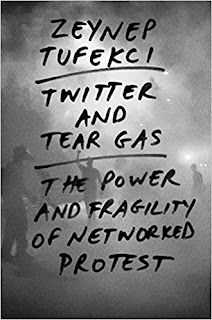 I initially planned to open with an extended personal narrative, but why bury the lede? So here's what's up: if you're interested in extending and deepening your thinking concerning the relationships between social media, digital connectivity, and contemporary uprising and protest movements, from Arab Spring and Occupy Wall Street to Black Lives Matter, you'll want to check out Twitter and Tear Gas: The Power and Fragility of Networked Protest (2017) by Zeynep Tufekci.

Interestingly enough, I discovered Tufekci on Twitter, deciding to follow her after I noticed her name in reference to news articles on this or that event. At some point, I noticed that she was authoring a book, so I decided to check it out. I live in St. Louis, so I've been inclined to think about the triumphs and shortcomings and decline of protest movements in local terms since the shooting death of Mike Brown and the organizing related to Ferguson. I've read quite a bit since that time, but Tufekci has given me a much larger view of things.

Twitter and Tear Gas primarily concentrates on movements around the world--in Egypt, in Turkey, and in other places, more so than on protests associated with Black Lives. But there are all kinds of parallels and shared lessons from all these "networked protests."

One main strength of the book emerges from the fact that Tufekci is such a reliable, well-traveled witness. She's attended several protest sites and interviewed hundreds of people. The book embeds many of their voices and observations as events are unfolding or as they reflect on their participation. So there's an important journalistic, on-the-ground reporting feel to the book. At the same time, Tufekci brings in academic analyses, drawing on ideas from various fields such as sociology, cultural studies, and of course technology. In short, she places the movements in historical context, which includes events related to online, digital developments.

A surprising and welcome component of the book is Tufekci's discussion of the Civil Rights Movement in relation to these contemporary protest movements. Twitter and Tear Gas illuminates the innovative tactical and logistical efforts of civil rights organizers, drawing links and making distinctions concerning modern-day organizers. Tufekci also highlights how earlier organizing, like student and antiwar movements of the 1960s, served as precursors for  the protests we've witnessed over the last 6 to 7 years in various countries (100-101).

Tufekci discusses the swift and far-reaching impact of ingenuous protestors like the group of political novices who formed @TahrirSupplies -- a coordinating group that arranged medical supplies and services for activists in Egypt in the fall of 2011 (54-60). Reading about the "logistics and practical details" of various groups was enlightening and inspiring.

Tufekci does much more than offer feel-good stories though. At every turn in the book, we learn of the limits of some of the principles widely celebrated by many contemporary activists. For instance, while many participants promote the value of leaderless movements, Tufekci convincingly illustrates the ways that leaderlessness in fact stifles major objectives. We've all noticed what happens as movements lose steam in part because of the absence of decision-making and what is known as "tactical freeze" where "new movements are unable to develop and agree on new paths to take" (77). Some of those disheartening outcomes are the result of leaderless movements.

Tufekci's clear-eyed perspectives on the struggles of movements to progress are vital for those of us trying to understand the challenges and for those seeking to improve or develop their own organizations.

I'm only half way through the book right now, so I'll report more when I'm done (my summer work schedule has drastically slowed my pace of reading and blogging). But I was enjoying some what I've been learning as I read, which is why I decided to post these initial notes and impressions concerning the book.
Posted by H. Rambsy at 8:14 PM