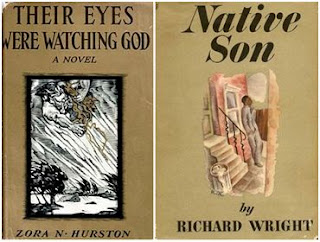 Ted Underwood’s presentation, “Bestsellers and Critical Favorites, 1850 – 1949,” at the Cultural Analytics symposium provided us with another way to interpret Zora Neale Hurston’s and Richard Wright’s literary legacies. In some respects, Underwood’s work offers a kind of sociology of literature. He discussed findings that represented “a subset of fiction reviewed in elite periodicals and also a subset of bestsellers, and pulp magazines.”

He presented a series of visualizations that charted the relationship between sales and prestigious literary reviews among writers from 1850 – 1949. We were especially intrigued by a section he did on writers from 1925 - 1949. His findings suggest that Zora Neale Hurston’s novel Their Eyes Were Watching God (1937) was just as likely to be reviewed in elite literary magazines than Wright’s Native Son (1940).

The resurgence of support for Hurston’s Their Eyes Were Watching God during the 1970s was built in large part on the premise that she had been overlooked. Underwood’s findings might lead us to qualify some of that prior thinking though. In comparison to the reception to Wright’s novel, Hurston may not have done as well after 1950. However, at the time of publication, Hurston’s novel achieved far more critical assessments than most other novels by African Americans at the time of publication.

Hurston and Wright are often pitted against each other. But in fact, they are both outliers in some respects. So perhaps we have been overlooking other critical factors that contributed to Hurston’s fading into obscurity as well as Their Eyes Were Watching God falling out of print?

Keneth Kinnamon's extensive bibliographic work -- A Richard Wright Bibliography: Fifty Years of Criticism and Commentary, 1933-1982 (1988) and Richard Wright: An Annotated Bibliography of Criticism and Commentary, 1983-2003 (2005) --  have confirmed the significance of Native Son and Wright's work in general for critics. In addition, The Norton Anthology of African American Literature presents 1940, the year Wright’s novel was published, as the start of the “Realism, Naturalism, and Modernism” period. The section concludes in 1960, the year Wright died.

Ultimately, Underwood’s presentation made us think about how our specialized knowledge in African American literary studies might combine with quantitative approaches with our on-going considerations of  literary artists.


Related:
• The Jay Z Dataset--presentation at the University of Notre Dame
Posted by H. Rambsy at 12:35 PM