[All photographs by Howard Ash--SIUE]
For more than a decade now, I've attended performances in East St. Louis and on the campus of SIUE featuring student performers from East St. Louis. So, I was excited to witness the Spring Recital of the SIUE/East St. Louis After School Performing Arts Program on Thursday, May 18. Given the historical significance of Katherine Dunham and her active involvement with East St. Louis arts and programming, the location of the event in Dunham Hall was fitting.

Approximately 25 students performed during the recital. They sang and danced. They played piano, guitar, and bass. They did African drumming. In short, they did it all it seems.

The young people ranged in ages from 6 to 17 years old. They were also at different stages of preparation --some had been training since last November with others having slightly more experience.

Gerald Williams led the student performers on a stirring West African drumming and dance set. The precision of the drumming and dancing was really outstanding. It was also something to consider that some of the participants in that set had previously performed classical tunes on piano, did hip hop and modern dance, and played guitar and bass.

Jesse Dixon, Executive director of the SIUE East St. Louis Center, Jack Williams, and Mary Jo Pembrook have been among the main movers and shakers coordinating the Performing Arts Program. They, along with East St. Louis Center staff, college student assistants, and community collaborators, oversaw the training and after school program.

You can only imagine the organizational effort that went into pulling together an event like this one. How do you effectively train so many young people in such a variety of fields? What does it take to convince playful children to take on the persona of serious musicians and dancers? Who handles the details like transportation and daily snacks?

After the show on Thursday, Pembrook encouraged the audience to go to the lobby for a reception. As the audience left, she then turned her attention to another matter. Working with Howard Ash, the university photographer, Pembrook organized groups of performers to take photographs.  It was no easy task since they were still excited about their performances.

The young musicians and dancers laughed, jumped around, and struck playful and dramatic poses. And most important, they traded stories about their performances. They had just showcased their skills on a college campus on the stage of a building named after the legendary Katherine Dunham, so of course, there was much to be excited about and much to discuss. 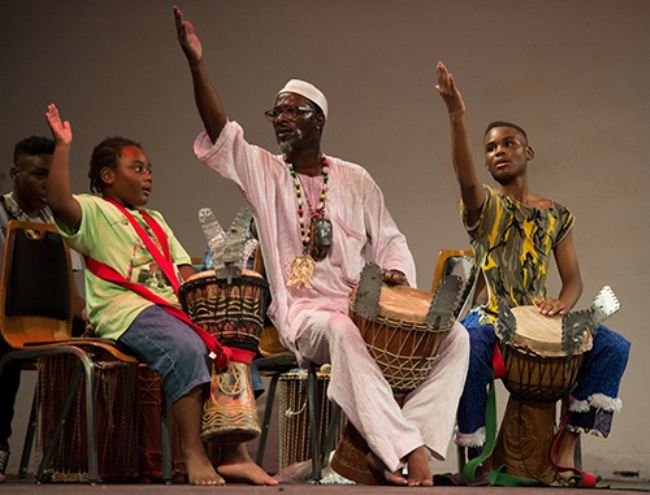