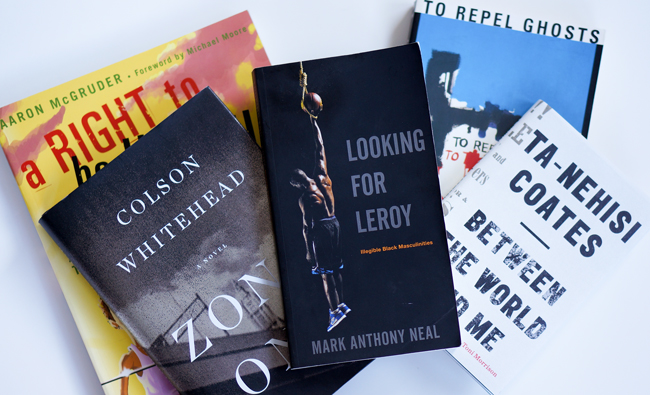 I was recently re-reading Mark Anthony Neal's book Looking for Leroy: Illegible Black Masculinities (2013). In particular, I was checking out his writing on The Wire, where he's writing about Stringer Bell, a  cerebral though problematic leader for an illegal drug enterprise. Thinking about Bell had me thinking about the histories of highly intelligent black males in fictional representations.

A shortlist of such characters in novels would include Richard Wright’s Cross Damon from The Outsider (1953), Ishmael Reed’s Raven Quickskill from Flight to Canada (1976), Charles Johnson’s Rutherford Calhoun from Middle Passage (1990), Paul Beatty’s Gunnar Kaufman from The White Boy Shuffle (1996), Colson Whitehead’s James Fulton from The Intuitionist (1999), and Mat Johnson's Chris Jaynes from Pym (2011). Ok, over in comic strips, you'd of course have to note the widely read, 10-year-old black studies scholar Huey Freeman from Aaron McGruder's The Boondocks.

And now, in comic books we have T’Challa and Changamire from Ta-Nehisi Coates's run on Black Panther. The presentations of the wise professor Changamire regularly present him in his library surrounded by and discussing books. The representations of a highly literate black man also appear in Luke Cage on Netflix, where the lead character is shown reading and discussing books a few different times. In poetry, I often think of Cornelius Eady's Brutal Imagination (2001) and Adrian Matejka's The Big Smoke, where we have these really smart and perceptive lead black male characters ruminating on various subjects.

What are all these black men writers up to by presenting us with these highly intelligent black male characters? In some ways, the writers need those characters in order to explore certain philosophical ideas (especially Wright, Charles Johnson, and Whitehead) and intellectual histories. In addition, life of the mind activities were integral to the personal and professional experiences of those writers, so it's not surprising that they would devise characters and place them in similar situations. (I should quickly add though that there are many writers who have formal academic training who choose not to render such representations).

Finally, some, if not all, of those writers are offering counterarguments to pervasive representations of unintelligent black men in society. The portrayals of simple-minded and foolish black male characters have such long, ongoing histories that people have a hard time deciphering or believing the existence of more complex renderings. Thus, those fictional writers participate in processes, to channel Neal, of making seemingly illegible black male characters legible.