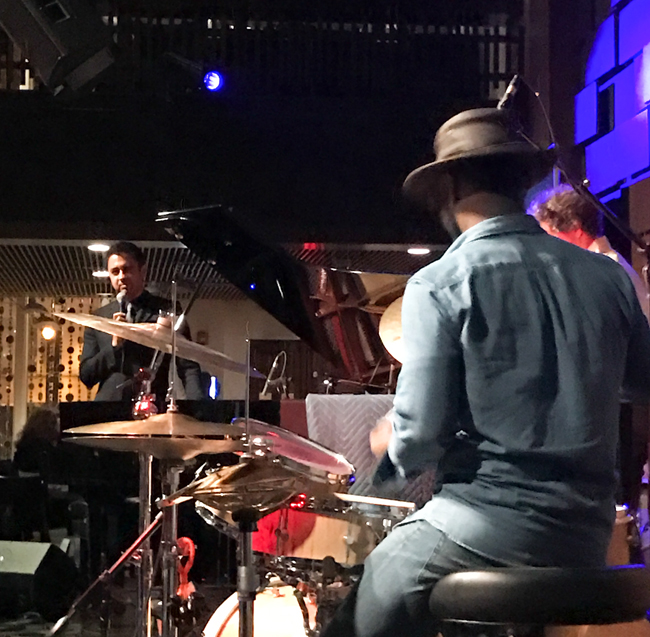 “The new music began by calling itself 'free.'" --Amiri Baraka

At the end of Vijay Iyer's opening show in St. Louis on November 30, a group of audience members approached the pianist to thank him for a wonderful show and to ask questions. One man noted that he enjoyed the music, but he was confused about aspects of what he heard.

"I liked the show," he said to Iyer, "but, some of the songs were hard to follow."

"What do you mean?" asked Iyer, trying to get clarification.

"There were no chord progressions and melodies to follow, you know, like in regular music," said the man, and then quickly adding, "I mean, I enjoyed it, but it...it didn't seem like the music on the radio, you know?"

Iyer patiently asked more questions, and began discussing aspects of the music. He noted that the group had in fact played a couple of more familiar or conventional tunes, such as covers of Stevie Wonder's "Big Brother" and Heatwave's "Star of a Story."

"Ok, yeah, but....," the man said before cutting himself off, as he tried to articulate more about his confusion.  As he was trying to gather his thoughts, others moved forward and began conversing with Iyer.

I'm no expert in jazz. Not at all. But I realized that I was far less confused than that listener about some of what the Vijay Iyer Trio was up to in part because I was familiar with the sounds and histories of what was known in some quarters as "free jazz."  And my lack of confusion wasn't born of any inherent, high listening I.Q. on my part. Instead, I was the beneficiary of an African American literature course, of all things, on free jazz many years ago when I was a graduate student at Pennsylvania State University.

The course was co-taught by literature professors William J. Harris and Paul Youngquist. We read literary works, essays, a biography on Sun Ra, and more. We watched Space is the Place. And of course, we listened to and discussed the music. Trane, Albert Ayler, Miles. Cecil Taylor. Ornette Coleman. And more. There wasn't nearly enough time to fit in everything we needed.

But so what? The class got me started along a long, wonderful journey of enjoying an art form that may have otherwise eluded me. Oh, and while I was already deep into the work of Amiri Baraka, the free jazz course deepened my interest in him, connected me much more to his Black Music writings, and gave me more concrete understandings of the multitude of jazz references that populate his poetry.


**************
Some years back, well after graduate school, I noticed Baraka mentioning this pianist named Vijay Iyer. Then or at some other point, I noticed that Iyer had contributed to The Shani Project, a musical and poetry production that Baraka, family, and friends created in memory of his slain daughter.

For me, Baraka has just been an important artistic force, a recurring subject for my writings. For Iyer, he was a creative model, and also a collaborator.


I'm here because of Amiri Baraka. He was a hero, friend and teacher. I will strive to honor him as long as I am able. #fb
— vijay iyer (@vijayiyer) January 9, 2014

So Iyer and I share a Baraka connection. But really, Baraka wasn't my only source or introduction for picking up on Iyer's music. He'd been playing for at least the late 1990s. And in 2009, with the release Historicity, it was much more likely to come across a figure like him--a jazz guy working through new artistic puzzles but also covering some popular tunes, and also moving in and out of that large realm of music that some folks might label "free jazz."

**************
The show in November with Iyer, along with Stephan Crump on bass and Marcus Gilmore on drums, was another important moment in my decades-long education on the music. Watching these guys live, playing there together, was wonderful for the feelings and thoughts it evoked. I was reminded too of the challenge of paying attention when confronted with such talented musicians at one time.

Who and what do you pay attention to when witnessing this trio? Iyer? Crump? Gilmore? All of them together? Trying to figure that took all my energies during segments of their set. It was only in that free jazz class -- from, what a decade and a half ago? -- that I began to think more deliberately about the implications of "collective improvisation," and that's what the Iyer Trio was offering up for us at different moments that night.

In their writings from the 1960s, you'll notice Amiri Baraka and folks in his circle referring to free jazz as "the new thing," and for Baraka at least, it was also described as "new Black Music." I realized while listening to the Iyer Trio that my abilities to feel and comprehend were linked to that free jazz cours and Baraka (who passed away three years ago today).

As the guy was asking Iyer about the lack of chord progressions and all, I was tempted to interject with something to the effect of "oh, they were just playing the new thing."

But there wasn't time. Plus, how do you explain the long reach of the new thing, that free thing from the 1960s in just a few seconds to a stranger? And how do you talk through how jazz has moved in original yet sometimes familiar directions since that time? And if you're no expert would you just make things more confusing? To really understand that free thing, it's like you'd need a whole graduate level African American class. And then some.