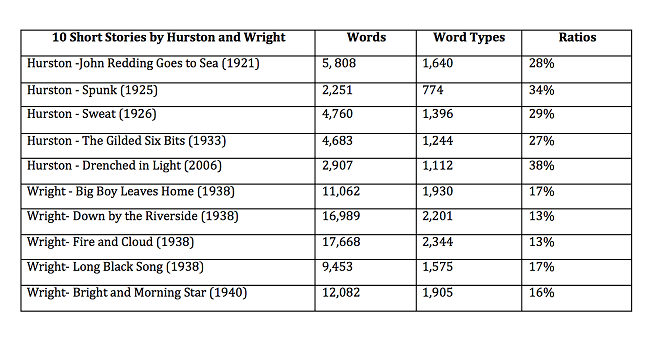 My on-going work with Zora Neale Hurston’s and Richard Wright’s southern short fiction led me to think more critically about instances of AAVE in African American literature over an extended period of time. AAVE often times serves as a stylistic marker that connects characters and geographic locations to the American South. Words such as “Ah” (I), “Yuh” (You), “Wuz” (Was), and “Git” (Get) are used frequently in stories published before 1940 to create phonetic spellings that are meant to mimic the drawls of southern black people.

I decided to examine 10 short stories by Hurston and Wright. For Hurston, I selected 5 stories that have been frequently reprinted in anthologies over the past 50 years. I chose to analyze Wright’s first short story collection Uncle Tom’s Children (1938). See above: I have provided a table that includes the story title, story word count, word types, and ratios.

Other than AAVE as a distinguishing factor, I am also interested in identifying other linguistic features that related to African American short fiction. On the one hand, Charles Chesnutt, Rudolph Fisher, Ralph Ellison, and Alice Walker all have stories that take place in various locales across the South. James Baldwin, Toni Cade Bambara, Toni Morrison, and Edward P. Jones, on the other hand, have stories that take place on the East Coast.

I use both sets of writers as controls in my data mining experiments about Hurston and Wright. Below, I have provided a chart containing the total number of words, word types, and ratios for 15 stories. I use these other well-known stories as a point of comparison to test my theories. 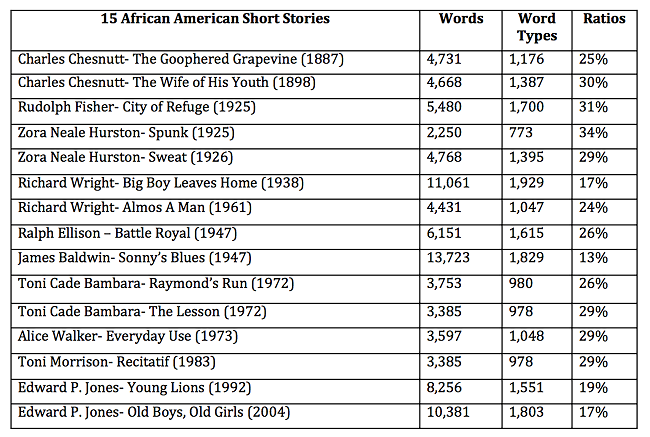 Related:
• A notebook on short stories by black writers
• #NEHBlackSpace – Space & Place in Africana/Black Studies
Posted by H. Rambsy at 8:53 AM