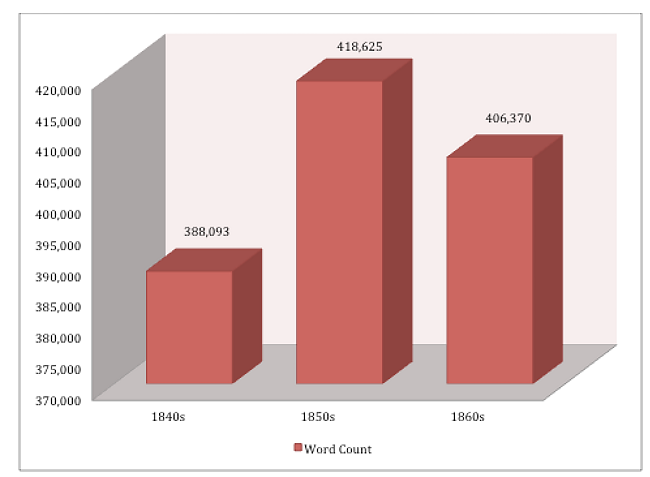 Our on-going research on Frederick Douglass led us to look at a larger body of slave narratives. We mined 33 narratives written between the early 1840s and late 1860s. Those 33 narratives comprised approximately 1,213,088 words.

Our project is at a preliminary stage with only 33 narratives among the more than 200 published North American slave narratives.  Still, utilizing text-mining software to quantify the word count made us aware of measurable differences between a large body of slave narratives when organized by decade. Based on the texts we selected, the 1850s marked a notable moment for extended individual narratives in comparison to narratives published in the previous and subsequent decade. 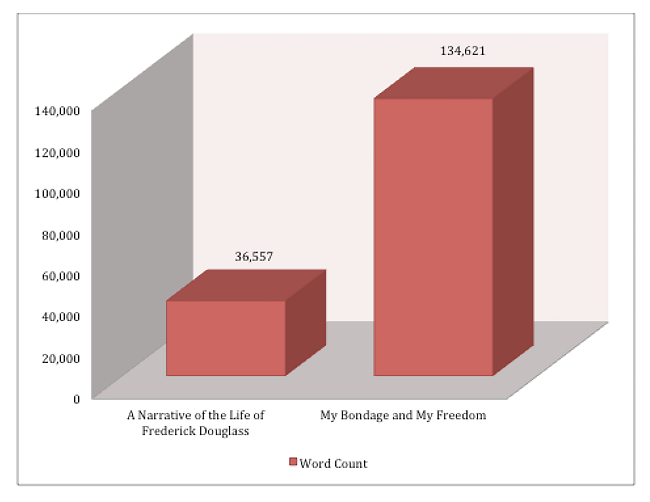 Douglass’s My Bondage and My Freedom (1855), published 10 years after Douglass’s Narrative of the Life (1845), contains over three times the words of his first publication. At 77,289 words, Twelve Years a Slave (1853) contains more words than the total number of words in The Experience of a Slave in South Carolina (1862), The Experience of Thomas H. Jones, Who Was a Slave for Forty-three years (1862), Life of James Mars, a Slave Born and Sold in Connecticut (1864), Narrative of the Life of J. D. Green, a Runaway Slave from Kentucky (1864), and The Story of Mattie J. Jackson (1866).

To what extents do the brevity or lengthiness of slave narratives matter? For now, we're uncertain.

For now, our tally of total words from a selection of slave narratives made us aware of the extended length of 5 of the 33 narratives published from 1842 – 1868. In further investigations, we’ll add to the total number of narratives we consider. We are also interested in thinking more about the relationships between word count of literary works and reception.