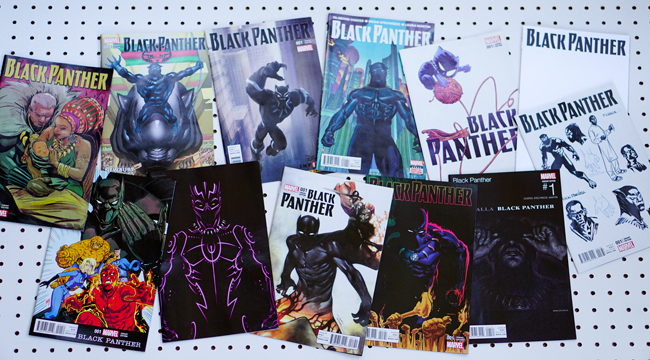 In the world of comic books, the publishers regularly coordinate the release of variant covers or variant editions, where a single issue of the book will have multiple covers by different artists. Collectors, especially those who are completists, are inclined to purchase all the variants, when and if possible. Collector-sellers are motivated to buy variants and sell them for high prices.

On the upside, it can be exciting to track down the variant covers, study the differing approaches of the artists, and talk with fellow enthusiasts about what we think about it all. Or at least that's how it's been with me so far.

Coates's Black Panther #1 was the first time I became interested in collecting variant covers. I declined to do so a little while back when variant issues of The Walking Dead #100 were published. There have been various other milestones with popular comics that I overlooked as well.  But I've been following Coates's career since 2005, which likely influenced my decision to collect variants for Black Panther.

In some ways, my collecting habits began in African American literary studies and especially with my work concerning Book History. Over the years, I acquired multiple editions of books by Octavia Butler, Frederick Douglass, and Richard Wright. Maybe my book collecting practices were priming me for this Coates comic.

I own about 14 variants of Black Panther. The covers, which I hope to write about in some detail a little later, present a range visual ideas with T'Challa, the protagonist of the comic book, as the basis. As a muse, the Black Panther clearly inspires a variety of creative possibilities among artists.