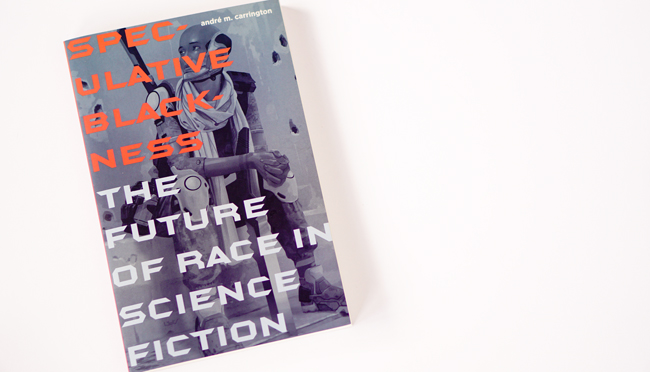 Finally done with spring grading classes and committee duties, I have a little time to catch up on all the various books I'd been meaning to read during the semester. One of the works at the top of my list was André M. Carrington's Speculative Blackness: The Future of Race in Science Fiction (University of Minnesota Press, 2016). I enjoyed the book--a work that had my mind moving in multiple directions on the lines of SF, comic books, Star Trek, fandom, Afrofuturism, and on and on.

I was intrigued by several of the topics he covered. For one, his treatment of fandom and fan fiction was particularly useful. I've been thinking about the activities of fan culture for some time, and Carrington gave me multiple entry points to think even more. So often, we hear the use of "fanboy" dismissively, but Speculative Blackness highlights the histories of fandom, with an eye toward African Americans, and also the discussion of online fan fiction activities and sites.

Carrington's research and writing on comics and especially African American comic book characters are especially impressive. His knowledge coincided with my interests, so I found myself highly engaged with his chapters on Storm in the Marvel Universe and Milestone Media Company.

Much of the formal work that we do in the field of African American literary studies concerning speculative fiction concentrates on Octavia Butler or say the "magical realism" in works by Toni Morrison. There's relatively little discussion of speculative fiction in fandom, shows like Star Trek, and comic books, all of which make Carrington's book important.