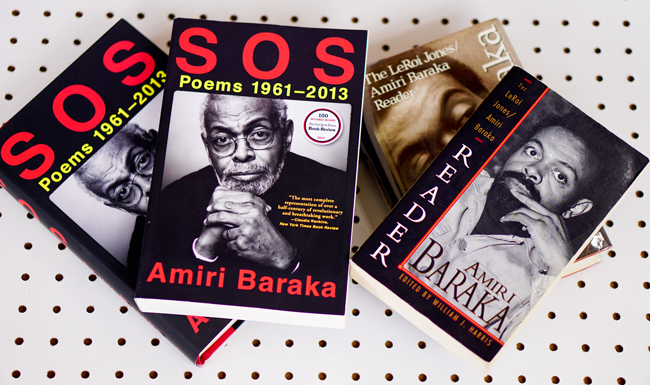 Last week, George Packer had a piece "Race, Art, and Essentialism" in the New Yorker where he was (rightly)  raising questions about Rick Moody's suggestion that black people naturally write better about black music than non-black people. But then, strangely, Packer felt it necessary to insult Amiri Baraka.

Packer, referring to Baraka as "LeRoi Jones," describes an early, useful essay and then follows up parenthetically to deride the writer. Here's Packer:


"Jones was arguing that white critics, so far, had shown the limitations of their cultural experience. He wasn’t (yet) insisting on the essentialism that equates color with judgment. (This was the early Jones, still a member of the Village beat scene, before his life as Baraka took a turn into cultural nationalism, anti-Semitism, and forgettable writing.)"

Baraka's black arts works, and his poems and essays post-1967, can be summed up as "forgettable writing"? Really? There are many ways to describe the career, work, and productions of Baraka from the late 1960s up until his death in 2014. But "forgettable writing" is not one.

Packer's critique of Baraka's late 1960s and 1970s anti-Semitism  is necessary, and even Baraka would agree, given his self-rebuke of previous positions. Baraka also routinely acknowledged the limits of cultural nationalism in print and speeches. Those self-critiques were perhaps unknowable to Packer.

Whatever the case, Packer's low regard for the work Baraka produced over the last few decades is startling and irresponsible. Baraka remains one of our most widely known, critically acclaimed, and yes, memorable writers. If his work is forgettable, what do we make of all -- the vast majority of -- black writers beyond Baraka? Or, was it the cultural nationalism and anti-Semitism that made his work forgettable?

No, Packer was wrong. In more ways than one. First, he's making a sly dig by insisting on referring to Baraka as Jones. Why would Packer resist using the name Baraka chose for himself the last 47 years of his life? Supposedly, Packer was trying to distinguish the memorable writing of early Baraka with the forgettable writing of late Baraka? But why does late Baraka seemingly begin in 1967 and not in 1977, or 1987, or 1997, or 2007, or 2013? (I'm not just making rhetorical flourishes here. Periodizing a black writer and black writers with such extensive publishing careers is a challenging and rewarding task for literary historians and scholars of African American literature).

Second, Packer misstates a key publishing note: "In the summer of 1963, the poet LeRoi Jones (who later renamed himself Amiri Baraka) published an essay called “Jazz and the White Critic,” collected shortly after in his book 'Blues People.'”

Actually "Jazz and the White Critic," first published in Downbeat magazine, was later "collected" in Baraka's Black Music (1967), comprised of liner notes, profile pieces, reviews, and essays that were published between 1959 through 1967. Packer, and really all of us, would benefit by considering Baraka's consistency and developments over that stretch of 8 years. What if Baraka's outlooks on jazz and jazz criticism remained constant, while aspects of his poetry and name changed?

Either way, Baraka's Black Music, not Blues People (1963) or Downbeat magazine for that matter, was what gave "Jazz and the White Critic" its largest readership. The writings Baraka produced prior to his designated "cultural nationalism" phase apparently resonated among readers interested in cultural nationalism  as well as among readers who were not interested. The most widely discussed (unforgettable?) essay from Black Music is Baraka's "The Changing Same: (R & B and New Black Music)," which like many of his writings, sought to highlight the sense of continuity or a tradition across generations and genres of black expressive culture.

Finally, Packer's passing statement about Baraka's so-called "forgettable writing" diminishes the extents to which so many people seek to retain his work. Among many examples, what stands out to me are the hundreds of people who have uploaded files of Baraka reading his work to YouTube. Last I checked, there were more than 17,000 "Amiri Baraka" YouTube videos. Few other writers have been so actively, digitally remembered in this way.

Related:
• A Notebook on Amiri Baraka
Posted by H. Rambsy at 7:33 AM

Your comments on George Packer's essay remind me that American critical commentaries are becoming somewhat violent if not vile, approaching the barbarity of many comments on social media and tempting me to go "postal" to avoid stress. Simon Gikandi's January 2016 PMLA editor's column "Looking Back on the Black Aesthetic" is a good example of post-whatever discourse that combines accidental and deliberate misunderstanding of historical processes. Under the influence of Henry Louis Gates, Jr., Gikandi engages Addison Gayle's The Black Aesthetic (1971)first rather than the preparatory essays in Home:Social Essays (1966) and the groundbreaking work collected in Black Fire (1968). Gikandi is interested in "comparing the literary projects at the University of Nairobi in 1968 and those at various centers of black thinking in the United States" as "one way of recognizing the location of the black aesthetic at the intersection of local and global cultural networks" (11). But I hit the ceiling when a few pages later I read ---"The aesthetic was attractive because of its capacity to phenomenalize blackness -- to imagine it outside the materiality of American life and to affirm the subjective experience of the black subject in itself" (15). However philosophically precise this choice of wording might be, it is regrettable. My friends and I never imagined our lives "outside" the materiality of living, nor did we consider ourselves a "thing" associated with the pronoun "it." I guess Gikandi is more intelligent than Parker, but both of them create blindness where insight should obtain.