The Lead-up to Yaa Gyasi's Homegoing 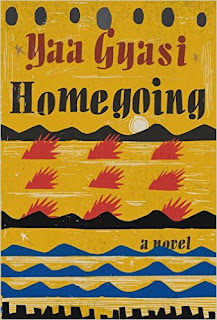 In a month or so, those who subscribe to publications that showcase literary fiction will increasingly come across mentions and full-on ads featuring Yaa Gyasi's Homegoing (June 2016). So far, articles about publishing news have referenced reports that Knopf paid seven-figures, outbidding  9 other publishers in the process, to acquire Gyasi's debut novel.

Knopf will likely channel its many resources to ensure that Homegoing gains the largest possible recognition. Both Knopf and the publisher Spiegel & Grau are divisions of Random House. In the lead-up to publishing Ta-Nehisi Coates's Between the World and Me, Spiegel & Grau sought out Knopf author Toni Morrison to provide a blurb for the book. Now, in the lead-up to publishing Gyasi's Homegoing, Knopf requested and received a blurb from Coates.

Gyasi was born in Ghana and raised in Alabama, and studied at the Iowa Writers' Workshop.  An early review in Publishers Weekly notes that "Gyasi’s amazing debut offers an unforgettable, page-turning look at the histories of Ghana and America, as the author traces a single bloodline across seven generations." The ambitious scope of the book (i.e. "seven generations" charting a people from Africa to North America) may explain part of why Knopf and those other 9 publishers found Homegoing appealing.

Those publishers were vying to acquire Homegoing in the expectation that the book and author would do really well among readers. Of course, when people talk about novels of ambitious scope, charting the experiences of a people from Africa to America, Alex Haley's Roots (1976) is mentioned. In recent years, The Twelve Tribes of Hattie (2012) by Ayana Mathis, also graduate of the Iowa Writers Workshop, also covers a somewhat wide span of time and is set in relation to the Great Migration. As an Oprah Book Club selection, Mathis's novel received wide attention.

I'm interested in reading Homegoing when it's published this summer. In the meantime, I'll keep an eye on the lead-up to the publication of Gyasi's novel.
Posted by H. Rambsy at 6:59 AM

Random House may be betting that Yaa Gyasi will become as popular as Karl Ove Knausgaard.