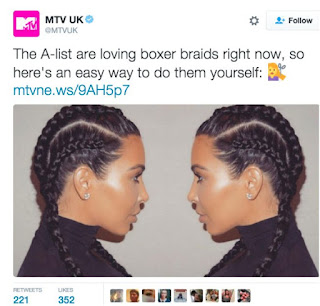 It seems that MTV UK has credited Kim Kardashian for making cornrows popular. They call her hairstyle “boxer braids," which they assume were inspired by the Hilary Swank’s character in the boxer movie Million Dollar Baby. MTV UK writes, “Whether you’re off down the gym or need a casual but polished day to night style, meet your new favorite hair do: boxer braids.” Interestingly, this isn’t the first time that an ethnic hairstyle has been appropriated by mainstream media: Kylie Jenner was cited on Marie Clare’s twitter as taking “bold braids to a new epic level,” and now Kim K receives extra credit for a hairstyle that African American women have worn for centuries.

For black women, hair care and maintenance are important, especially in natural hair communities. In the early 1990s, I frequently wore these braids after my mother washed my hair. At the time, they were used as a way to separate the detangled hair from the rest of the uncombed hair. As I grew older, I wore braids in the summer because of the humidity. Sometimes, during the school year, I would wear my hair in braids pulled into a ponytail. And today, I wear braided styles—called protective styles—to protect my hair from the harsh elements of the air, and promote hair growth.

Ultimately, Kim K’s “style” is nothing new to black people, we call this hair style cornrows, straight backs, dookie braids, braids your momma puts in your hair under your swimming cap, set-it-off-braids (in homage to Queen Latifah), braids to the scalp, and protective styles.

But more importantly, it is telling how we are having this conversation when schools and corporations are adding language to their uniform code to discourage African American hairstyles. Several women and girls have told their stories, including me, about how their “ethnic” hair was negatively perceived in school and the workplace. Now, black women have to watch as the styles we have been told were unprofessional, outdated, unkempt, ghetto and just downright inappropriate, are remixed and glorified outside of black communities. To African American women, it isn’t just a hairstyle but the feeling attached to the reality that when we walk into a room, we are judged by the very thing that grows out of our scalps. Black hair is political, it is personal and to see characteristics of our culture lauded by people outside of our community is disheartening.

*************
Briana Whiteside is a graduate student  at the University of Alabama and a contributing writer for the Cultural Front.
Posted by H. Rambsy at 7:57 AM

Tie your hair up and keep the rest of the hair sleek. Our wig cap is made of good elastic nylon material, soft and breathable, comfortable to wear, and does not add any burden to your head. Capsize or head size is an essential part of the wig-making process. That's why we strongly advise customers to use a measuring tape to measure the circumference of their head or ask someone to help measure the circumference of their head before ordering our wig.