The Visual Artist as Poet: The Case of Rachel Eliza Griffiths 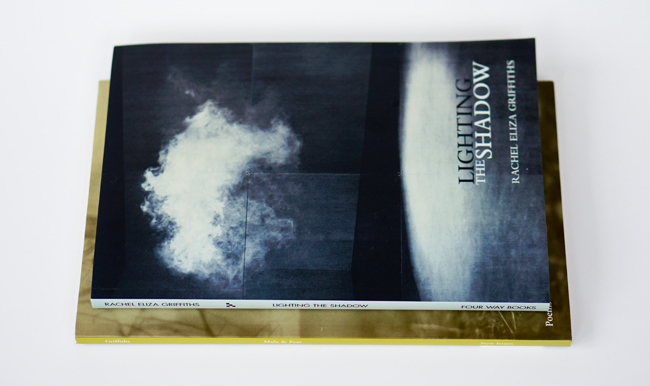 After reading Rachel Eliza Griffiths's Lighting the Shadow (Four Way Books, 2015), I went back and read through poems from her volume Mule & Pear (New Issues, 2011). Not sure what I was looking for. Maybe continuities and departures.

What was more evident to me in this recent volume than her previous one was Griffiths's identity as a visual artist. The references to photographs, visual works as inspiration, and light, dark, lighting, and shadows were prevalent. Or perhaps Griffiths's reputation as a photographer inclined me to heighten my search for imagery in her poetry?

Mentions of "light" appear regularly throughout the book. In "Self, Traction," Griffiths writes that "They pull the light out of her skin." In "new world," she asks, "What light savaged their minds?" In "Before Blood after Honey," she notes that "Light happens finally beneath the skin." In "gymnopédies," she goes, "Only then can I imagine how light breaks / over the earth & does not forgive / its innocence."

In addition to issues concerning lighting, she regularly draws on visual images as points of reference. In a note at the back of the book, Griffiths informs readers that her poem "The Year Picture" takes "as its genesis" a photograph by Taslima Akhter of the Rana Plaza collapse. Her poem "Self, Traction" is based on a 1940 photograph of Frida Kahlo by Nikolas Muray. Griffiths points out that her poem "The Skin I Live In" takes its title and "much of its imagery" from Pedro Almodóvar's 2011 film.

Lighting the Shadow reveals a poet who is mindful about visual art and deeply interested in re-presenting elements of photography, film, and lighting in her poetry.