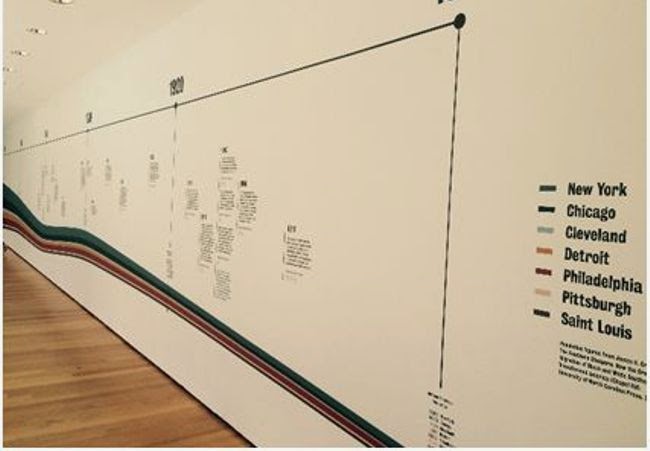 Jacob Lawrence’s Migration Series, which he originally entitled The Migration of the Negro in 1940 – 1941, features an artistic documentation of African American movement form the South to North. I call the series a “documentation” because Lawrence created the project in the middle of this major movement of African Americans. A timeline on the wall at the entrance of the exhibit helps visitors to locate Lawrence’s working in the middle of the actual migration.

It is evident that he had his finger on the pulse of the movement as it happened. Lawrence’s unique combination of painting and prose (captions) narrates this moment in history as hundreds of thousands of southern black people migrated North. It also reveals a number of the realities and complexities of black experiences in the Great Migration.

The sixty panel series moves visitors from the troubled South to a North that was less than welcoming. “One-Way Ticket Jacob Lawrence’s Migration Series” encloses all sixty panels with the timeline at the entrance and other artistic representations of the migration. The multimedia exhibit includes showcases of novels, poetry, and articles of the time period, and contemporary, that speak to the historic movement.

This structure broadens the context and expands our appreciation for Lawrence’s work. When we typically think of artistic representations of the Great Migration, a number of writers come to mind such as Richard Wright, Langston Hughes, and James Baldwin. The exhibition of the Migration Series at the Museum of Modern Art (MoMA) situates Lawrence’s painting as an essential piece of the larger artistic narrative that complemented the Great Migration.

Jeremiah Carter is a graduate student in the English Department at Southern Illinois University Edwardsville.