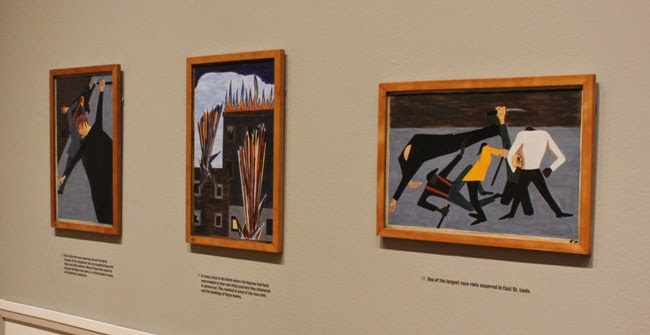 We arrived in New York on Sunday night, and Monday morning we headed to the Museum of Modern Art (MoMA) mainly to see the exhibition, "One-Way Ticket: Jacob Lawrence's Migration Series and Other Visions of the Great Movement North." The exhibit includes the 60 panels from Lawrence's 1940-1941 series depicting aspects of the Great Migration. The exhibit also showcases a wide range of materials related to Lawrence's paintings, including books, newspaper clippings, poems, music, and video clips.

"One-Way Ticket" is really powerful and informative. I was reminded of important aspects of history concerning African American migration and also continually made aware of new facts such as the scale of new migrants traveling to Detroit, St. Louis, Chicago, New York City, and other major cities.


Javier, one of our travelers noted that he valued the exhibit because of how Lawrence's paintings "tell a story, a story of African-American migration." And of course, we didn't need to only rely on the paintings to tell stories, given that we were presented with such an array of various narratives in the exhibit.

In the main section of the exhibit with Lawrence's images, for instance, a table was equipped with touch-screen devices showing information on each of the panels from the Migration Series. There was also a viewing and listening station in another room with poems by Tyehimba Jess, Rita Dove, Kevin Young, and other poets. Overall, the exhibit was an engaging mixed media activity that served as an tremendous learning experience for our group.