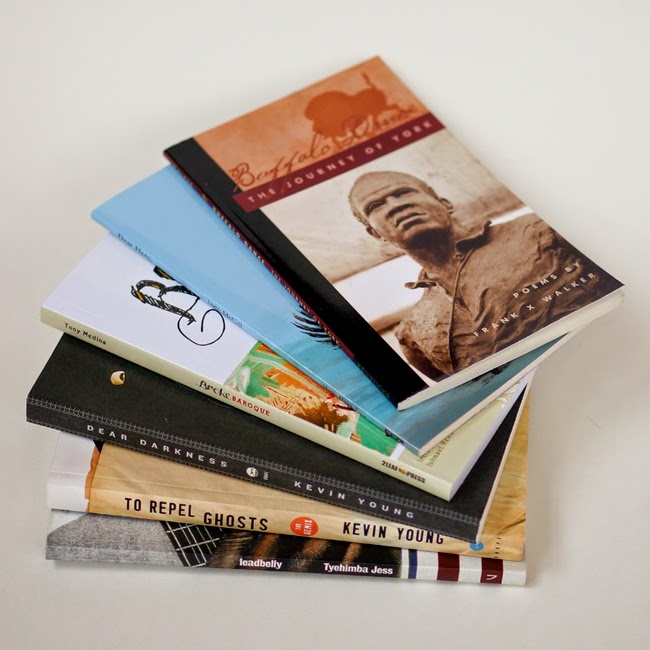 It's clear that large numbers of African American poets have a thing for bad boys, or more specifically, the idea of bad men. Throughout the history of black poetry, poets frequently wrote about unruly, rebellious, troubling, militant, criminal, and defiant black men. Bad men are clearly important poetic muses for women and men poets. What follows are some reasons why.

1. Addressing anti-black racism -- Poets who adopt the personas of bad men are in a position to speak out on a range of racist practices that those figures may have witnessed. Brutal Imagination by Cornelius Eady, Leadbelly by Tyehimba Jess, and The Big Smoke (about Jack Johnson) by Adrian Matejka track various modes of anti-black racism that real or fictive black men observed from a distinct vantage point.

2. Reinterpreting  the meaning of "bad" -- When poets write about figures such as Frederick Douglass, Henry Box Brown,and Nat Turner, they are essentially pushing and challenging the notion of "fugitive" slaves. A "bad" slave for white owners is now often viewed as good in the eyes of black folks.

3. Transmitting aspects of folk culture -- The continued, long-running focus on Shine, Stagolee, and related bad man figures allowed black poets to participate in established black folk traditions. Participating in the production of bad man poems is to draw on a range of distinct African American linguistic and artistic practices.

4. Demonstrating creativity -- The composition of poetry featuring bad men gives poets opportunities to subvert and re-arrange aspects of a well-known approach and at the same time showcase creativity.  During the late 1960s, dozens of poets wrote about Malcolm X; doing so allowed them to align themselves with a large group of fellow poets and at the same time reveal their unique takes on the militant Muslim minister.

5. Exploring alternative and distant territories -- Poets, especially a class of people, aren't typically known as bad men, so writing about and in the voices of such figures allows poets to stretch out and explore areas that might be less familiar to their personal experiences. Granted, there are many areas that are likely outside the personal experiences of poets, but "bad men" constitute well-known subjects that are nonetheless distant enough from poets and their audiences.

6. Bad men lead exciting lives -- Bad man figures draw wide attention for some of their outrageous or notorious activities. The defiant and rebellious ways of select men are no doubt appealing for poets interested in showing how black people challenged oppression.


Related:
• Poetry, bad men, and intellectual histories
• A Notebook on bad men in poetry
• Black Poets, Bad Men, and Creativity
Posted by H. Rambsy at 7:54 AM